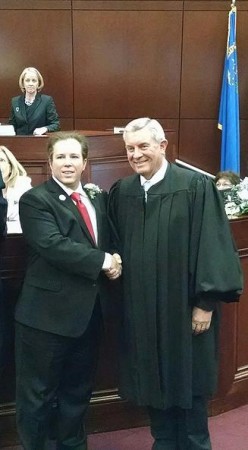 Las Vegas Assemblyman John Moore once believed the only way he could serve his country was through his service in the military. That is what Moore did, he enlisted as a young man and then after 9/11, he re-enlisted at the age of 40. He has consistently held the desire to serve the people and his country throughout his life. He admits to being human and making poor decisions, as well as ending up in hot water a few times. However, those are some of the experiences that have humbled him and taught him how to be persistent as well as overcome adversity.

Moore ran for office in 2014, winning the Las Vegas, Nevada Assembly District 8 honor gave him new ways to be able to serve the people. He listened when they said no big government and no more taxes. He voted against the largest tax hike in the history of Nevada and aimed to keep his campaign promises. However, much to his chagrin, other politicians did not have the same values. Moore believes a promise made is a commitment to be kept.

Moore wants the people of Las Vegas to know that he did keep his promises and remained loyal. He fought alongside the other supporters against the odds, but they were overrun by legislators who were working for special interest groups and not the people.

His campaign promises remain the same, with a new goal, he plans to build a larger group of assemblymen to fight for the people alongside each other. He appreciates the communication he has received supporting his second run. Moore will continue to serve the people of Nevada when re-elected.

The Las Vegas assemblyman had this to say, “When I ran for office, I campaigned on working across the aisle for the good of all Nevadans. I accomplished that goal. Working with Republicans to get 16 bills passed [and] Democrats to get 8 bills passed. We can do the work of the people when we are willing to work together.”

• benefit the charter schools in Las Vegas through the revision of financial requirements
• penalizing those who make non-emergency phone calls within certain parameters
• amending how bids are accepted by the homeowners’ association
• allowing military personnel stationed in Nevada, but are not residents, to enroll in the Program for the Education of Motorcycle Riders

• a revision in dealing with the estates of the deceased
• revising a policy preventing schools from disciplining students who simulate firearms or other dangerous weapons, wearing outfits or accessories that depict a firearm or weapon, as well as expressing certain opinions in specific circumstances
• clearly defining the right for students to have the freedom to exercise their religion and freedom of expression
• 30th Anniversary of relationship with Taiwan, the state’s sister city
• the bills memorializing former Assemblymen Peter L. Livermore and Joseph Michael Hogan, Sr.
• honoring of those from Nevada who lost their lives in the Global War on Terrorism
• the recognition of the strategic partnership, friendship, and the expression of support from Nevada to the State of Israel
• board certified make-up artists working in licensed businesses no longer have to take a nationally written exam to obtain a separate state license
• school districts and charter schools in Las Vegas are required to contract with each other for school police officers under specific circumstances
• requires research institutions to offer specific cats and dogs to an animal shelter or rescue for adoption before euthanizing the animal
• created the composition for the new Women Veterans Advisory Committee
• revising how the biennial audit will be governed for the Public Employees’ Retirement System
• expanded the definition of personal information
• created a clearer list of the obligations issued and incurred by Las Vegas municipalities or school districts to be used solely for the purpose of fulfilling requirements, including specific publications concerning their intent
• addressed firearms and ammunition in foster homes
• gave drug manufacturers the ability to make investigational drugs, biological products, or devices for certain patients under specific circumstances
• requires the State Board of Health to comply with regulations and requirements for child care agencies that deal with breastfeeding, physical activities, and other provisions.
• The Board of Wildlife Commissioners and the Department of Wildlife proposed legislation regarding hunters with disabilities concerning how a person may assist a licensed hunter with disabilities in killing and retrieving large game; allowing one to carry a handgun, for self-defense, during bow and muzzle-loading firearm hunting season
• authorizes the Department of Motor Vehicles to ask before registering males using the Selective Service System required by federal law

The accomplishment of the campaign promises made proves that Moore keeps his word and is serving the people of Las Vegas. “You can trust I am working for you!” – Assemblyman John Moore for 2016.