The Tipping Point on Restaurant Tips 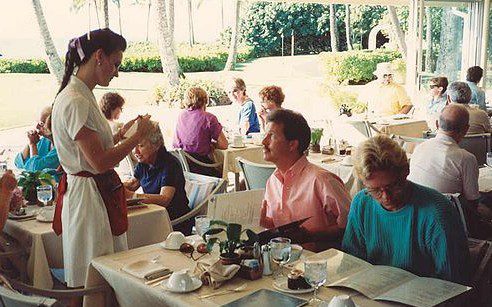 It is the tipping season, when most service providers expect a fat festive gratuity in the name of holiday cheer. At restaurants and other places, giving tips for service has been a deeply ingrained custom, but it could be going the way of other old-fashioned Emily Post rules. Not quite at a tipping point, the move to ban restaurant tips got a big boost this week when Joe’s Crab Shack became the first national chain joining the growing list of restaurants banning tips.

The notion of giving tips for service in nicer restaurants could be ending (and was always questionable in places like ice cream stores and fast food stands) could be fading fast. Approximately 4.3 million people in the U.S. are tipped employees; 60 percent are wait staff or bartenders according to the Economic Policy Institute. But many are questioning the fairness of earning gratuities and the resulting wage disparity, leading several restaurants to eliminate tipping.

Here are some examples of restaurants testing the tip-less waters: Joe’s Crab Shack is conducting a pilot to test eliminating gratuities at 18 of its 130 restaurants. Price increases will be between 12 to 15 percent and the staff will receive higher, fixed hourly pay based on past performance. This is similar to the approach Shake Shack founder Danny Meyer is taking in his 13 full-service, upscale New York City dining establishments, including Union Square Café and Gramercy Tavern, next year when he will phase out customers giving staff tips. Renowned chef Tom Colicchio replaced tips with a flat service fee at his New York restaurant Craft.

There are two ways tipping is considering to be unfair. It does not really reflect service delivered and it rewards servers and ignore others in the process.

The basis of determining how much tip is earned is based on the customer’s order, not the service rendered. If someone orders a $20 entrée and has water a couple of refills of water, does the waiter really deserve a smaller tip from that customer than another who orders a $25 entrée and a $10 glass of wine? The custom of basing the tip on the bill’s total would call for a smaller tip (off a smaller bill) from the first patron even though more work and attention to the customer was involved. Is that really fair?

Additionally, waiters do not need the extensive training a chef requires. But, the wage gap between those serving the food and those cooking it has created a shortage of cooks, who incur significant tuition bills to learn their trade and have difficulty recouping it. (Some top culinary schools can cost $100,000 for a four-year program.) Creating a more equitable pay practice in restaurants will help rectify the disparity.

“I personally believe tipping is an antiquated model and you have seen most businesses in America migrate away from it over the last 50 to 100 years,” commented Ray Blanchette, CEO of Ignite Restaurant Group, the owners of the Joe’s Crab Shack chain.

So far, only a small number of the nation’s more than 230,000 full-service restaurants are making the move. Others are clearly watching to see if this will become the tipping point that eliminates restaurant tips.

Sources:
Wall Street Journal: Behind the Move to Ban Tipping
Forbes: Is Danny Meyer Tipping Ban Risky For Customer Experience?
Woman’s Day: Is This the Beginning of the End of Tipping?
CNN: A bunch of NYC restaurants just got rid of tipping
CNN: Joe’s Crab Shack is trying out no-tipping
Bloomberg: The Four Economic Realities of Tipping at Restaurants