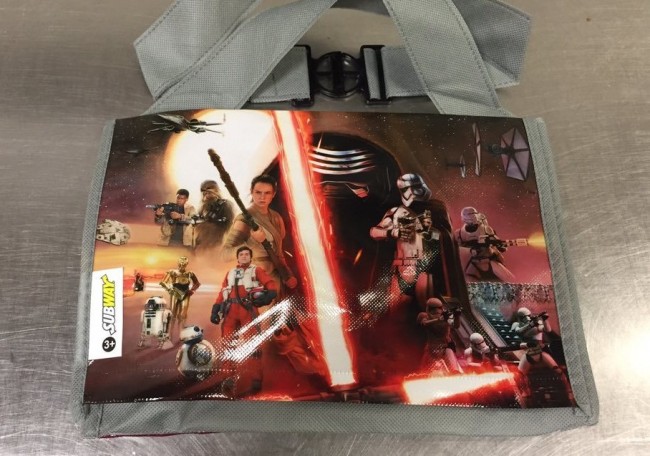 The toys, kids meals, lunch boxes, video games and tee shirts are de rigueur tie-ins for a big movie launch expected to appeal to all ages. However, the merchandise masters expect to use Jedi mind tricks with some unusual tie-in options for the Dec. 17 U.S. release of Star Wars: The Force Awakens.

Since the seventh film, like its predecessors, takes place in a “galaxy far, far away,” the merchandise tie-ins cannot be based on items used or eaten in the film (such as the Reese’s Pieces use in ET the exploded sales of the candy). Some of the items are sure to drive the expected business, others will undoubtedly inspire some holiday gift purchases and others would be for the die hard fan. But, many companies are banking that the movie will awaken the buying force too.

For 10 years, Disney film releases appropriate for children got the full Happy Meal treatment, but the big D and McD parted ways. Subway zoomed into the picture for Star Wars kids meals with 8 different reusable, collectable lunch bags sure to draw them back to another one. The bags include a small light saber too. For those ordering off the regular menu, there are six collectible Star Wars cups to gather. Subway launched a promotional campaign for its tie-in effort on Dec. 1 and even has sweeps prizes people may win.

Earlier Star Wars movies did not have much to offer females in terms of tie-ins, besides Halloween costumes. The infamous bikini and strange Princess Leia hairdo were not exactly inspiring. Queen Amidala did not push sales either. There are more females in the new film, and the Marvel movies have been criticized for not trying to sell to women. But, are cosmetics the best option? Whether sexist or not, the new Covergirl Star Wars Collection of special mascaras, lipsticks and nail polishes are being marketed to allow women to “Unleash the light within or dare to discover your Dark Side.”

A Visa card from Chase with Darth Vader or Yoda on it can be used to charge all the new merchandise. In Chase’s defense, they did not strike a deal with Lucasfilm timed with the new film. They have a long-standing deal with Disney, who now owns Lucasfilm, for debit and credit cards featuring the Magic Kingdom castle and such that offer discounts at Disney Stores. But the rewards with the new characters include discounts on some merchandise tied to the film and Meet ‘n’ Greets with Darth Vader. Those are nice features, but will people really change credit cards without the force being with them of better interest rates or no annual fee?

There are various food items too. The Kraft Macaroni & Cheese with Star Wars shapes have been available for a long time. But, now there are General Mills Star Wars cereals that resemble Lucky Charms but contain fruity-flavored marshmallow-like light sabers, space ships and such that are not exactly “magically delicious.” Campbell’s has several soups and types of Spaghetti-O’s with droid- and Yoda–shaped noodles. On the dark side, there is Espresso Chocolate Darth Vader-adorned Coffee-Mate from Nestle as well as some lighter options. Then there are the candies, cookies, and other more traditional marketing ploys.

In housewares, besides the usual bedding, towels, dish sets and trashcans, there are Star Wars appliances. No, they do not cook at warp speed. There are waffle makers that can make death stars or images of Darth Vader and a Darth Vader toaster that singes “Star Wars” into the bread like a branding iron. On the more practical front, there is a Stormtropper Silicone over mitt, a Death Star silicone spatula and salt and pepper shakers.

These are just some of the items already on shelves and debuting shortly. While the typical Star Wars fan may not be tricked or tempted to rush out to buy the tie-in Dodge Viper from Chrysler, the merchandise featuring characters from the film will be in the eyes (and minds) of wanna-be Jedis for months to come.