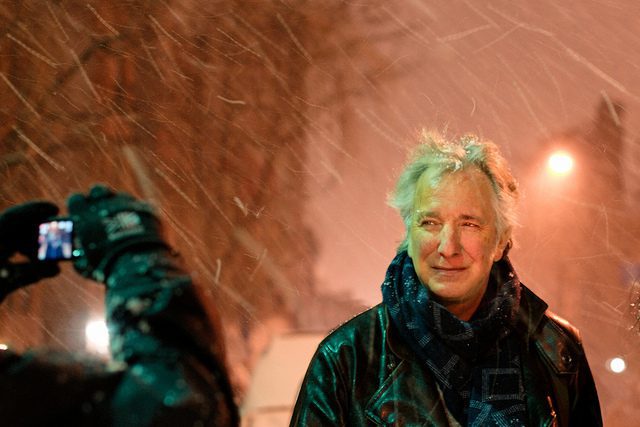 Alan Rickman, a British actor and Hollywood’s favorite villain, has died from cancer at the age of age 69. He portrayed numerous roles in various films since 1978, but to most may be most familiar with his role in Harry Potter as Professor Severus Snape. Rickman’s life consisted of acting for nearly 70 different plays, films, and productions since 1978 and lasted until his last performance which will air this year.

Rickman was born in Acton, London and grew up with two brothers and a sister. Having a strong interest in drama since Junior School, he eventually was offered to be trained at the prestigious Royal Academy of Dramatic Art. Here, his acting career started to enhance. His first recorded role was in Shakespeare’s Romeo & Juliet as Tybalt in 1978 for the British BBC Television Shakespeare series. In 1985, he landed a breakout role that consisted of him being a French aristocrat in a Royal Shakespeare Company production of Christopher Hampton’s Les Liaisons Dangereuses.

After a few more years of performing for BBC Television, Rickman’s acting career started to grow worldwide. He started to appear in American films in 1988 when he took part in Die Hard with Bruce Willis. His character, Hans Gruber, was a psychopathic villain and terrorist. He also reappeared in the second Die Hard movie, Die Hard with a Vengeance, in 1995. Alan Rickman, who was reported to have died from cancer, may always be known for his Hollywood villain roles and evil and languid voice, that often portrayed a mix of evil with wicked characteristics.

However, the villainous actor did have the opportunity to portray varied roles that may be opposite to what the world may be used to. He took on roles in romantic comedies and other dramas. He appeared in Truly, Madly, Deeply in 1991, Sense and Sensibility in 1995, and Love Actually in 2003. Rickman also played a role in the comedy film, Dogma, in 1999. He even played a role as former United States President Ronald Reagan, in Lee Daniels’: The Butler in 2013. He also appeared in Robin Hood: Prince of Thieves in 1991, Sweeney Todd: The Demon Barber of Fleet Street in 2007,  and in 2010 his voice was used as Absolem the Caterpillar in Alice in Wonderland. His last recorded performance will be for the second Alice in Wonderland film that will debut this year, Alice Through the Looking Glass, where his voice will be heard as Absolem.

Rickman spent almost 40 years acting, but his most prominent role was in the Harry Potter franchise. To millions of fans worldwide, this generation will always remember him as Professor Severus Snape. J.K. Rowling personally picked him for the part before the making of the first movie, Harry Potter and the Sorcerer’s Stone in 2001. For the next decade, he committed to his role in the rest of the seven Harry Potter films. Rickman was most passionate and loyal to the franchise and continuously showed love for the films in social media.

Surprisingly, Rickman won one Golden Globe Award and it was not for his performance as Professor Severus Snape. He won his first and only Golden Globe in 1997 and was awarded Best Performance by an Actor in a Mini-Series or Motion Picture Made for TV for his role in Rasputin (1996). Throughout the entirety of his acting career, he won 15 other awards and was given 29 other nominations. His awards and nominations varied from the Primetime Emmy Awards, BAFTA Awards, USA’s Academy of Science Fiction, Fantasy & Horror Films, the MTV Movie Awards, and many others.

Rickman’s family reported that the actor died from cancer early Thursday morning and was surrounded by family at the time. Alan Rickman, who may always be known for being Hollywood’s go-to villain, died from cancer at the age of 69. He married his wife, Rima Horton in April though the two had been dating since 1977. The couple had a very small and intimate ceremony in New York. They met at the Chelsea College of Art, where both were pursuing their acting career. The couple did not have any children.

One Response to "Alan Rickman Dies From Cancer"