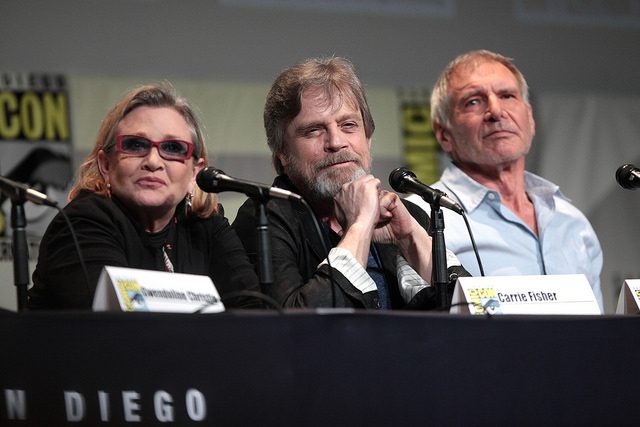 In a galaxy far, far away, toys and other items developed as movie merchandising were gleefully torn open, played with by children and eventually discarded. That was before unopened mint condition items became big business and categories of collectibles appeared ranging from memorabilia celebrating sports or Hollywood success to more specialized Civil War and Star Wars items. The popularity of memorabilia (and dollars involved) has led to an explosion of fake items, but Mark Hamill of “may the force be with you” fame has taken up the fight to stop the fraud against fans.

Hamill, the actor who played Luke Skywalker in the Star Wars movies, is tired of seeing items with his “autograph” being sold to fans believing that the 64-year-old had actually signed the memorabilia, which he did not. The actor noted that fans at events are being “stalked by these dealers that have shopping carts with 50 posters and stacks of photographs.” He expressed concern that the public is being swindled on a daily basis.

There is a lucrative market out there in memorabilia with huge dollars involved. Last Friday, for instance, there was an auction at Sotheby’s in New York of 175 Star Wars items that tallied $502,203 in sales. The item that drew the most money was a group of 7 The Empire Strikes Back action figures that sold for $32,500. A different sale by Vectis, a toy auctioneer, involved action figures that originally cost about $2 when the original movie came out in 1977 but just sold for about $25,000.

To protect fans, Hamill reached out on social media last month warning Star Wars aficionados to be aware of the unscrupulous marketers. He even authenticated autographs for some fans and indicated some others were fakes. The actor tweeted, “I’m so sorry there’s so many fans spending their hard-earned money for fraudulent signatures.”

His communication and efforts caught the attention of California Assemblywoman Ling Ling Chang. She talked with Hamill on the phone and was impressed by how passionate he was. “He said to me is that his fans are like family and that he did not want to see kids being victimized as he’s seen in the past. It’s such an honor to have him on board with us,” she said.

With his support, Chang introduced legislation requiring certificates of authenticity for any signed memorabilia sold in California. Sports items already have those protections in place, but the requirement does not cover other types of memorabilia – yet .

There have been crackdowns on fake memorabilia dealers. In 1999, the FBI conducted a massive investigation of forgery rings operating in Southern California. That operation culminated in the arrest of several forgers and the seizure of merchandise valued at millions of dollars.

While the proposed legislation works its way through the system, Mark Hamill encouraged people to join in his fight against fake memorabilia, which may escalate with the attention given to the new Star Wars: The Force Awakens movie. He recommended that people go online and compare his signature on items he has verified as authentic with any others to spot forgeries out there.