New York Governor Andrew Cuomo (D-NY) has issued a statewide order to get homeless individuals off the streets during freezing weather. The governor inked the order on Sunday, January 3 to remove homeless people from the streets and relocate them to shelters when the temperature is 32 degrees or below. The mandate was set to go into effect on Tuesday, January 5, when temperatures were expected to fall into the lower 30s. While some applaud Cuomo’s humanitarian effort to give the indigent population a decent place to stay during adverse weather conditions, other factions are questioning the legality of the mandate.

The mandatory relocation edict has many people choosing sides in the controversial move that is sure to elicit debate and possible legal action. On Cuomo’s end, he stated that he is ready to go to court over the policy. He has dismissed arguments from “so-called liberals” who contend that the homeless have a civil right to sleep on the streets. Nonetheless, most rejected the idea of a mandatory move. “That’s not right,” fumed Steve Jones, 63. “The governor can’t force people into shelters. We should have an option. People have rights.”

The statewide executive order, which was signed into law on January 3, is an extension of a policy already in place in New York City. Under the city’s “Code Blue” policy, homeless people who are considered to be a danger to themselves, others, and/or mentally unstable can be relocated by police and placed into a shelter or hospital against their will, if deemed necessary. Cuomo’s edict stated, “New York State law is clear and well-established that the State can take appropriate steps, including involuntary placement, to protect individuals from harming themselves or others.” 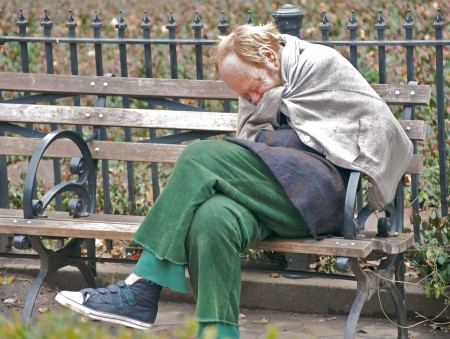 Nonetheless, Cuomo’s order has raised concerns among many New York residents and homeless advocates. Some of these concerns include the possible criminalization of the indigent population if the order is not enforced correctly or excessively. Moreover, many of the homeless in New York and across the nation have reported that violence, theft, and illegal drugs present in shelters keep them away from the facilities.

When questioned about the New York governor’s order to get the homeless population off the streets during freezing weather, two homeless individuals, Leroy Rubin Williams and Rafael Bonilla, offered their perspective on the mandatory move and the state of the shelter system. Williams commented that he stays away from the shelters because of the crime and aggression from other homeless residents. Moreover, Williams, 55, has been either homeless or in prison for multiple drug offenses over the last 30 years. Meanwhile, Bonilla, 21, stated that he is scared of the shelters due to the rampant drug use and theft that occurs at these facilities. Furthermore, he also claimed the state of the shelter system is the reason why he opted to stay on the streets.

It is important to note that Cuomo’s order mandates that shelters “are safe, clean, well-maintained, and supervised.” However, the edict does not offer details on how to achieve that goal. Moreover, there is apparently no additional manpower or funds allocated by the state as yet to help facilitate this order. This point was reiterated by New York City Mayor Bill de Blasio, who has been engaged in a months-long feud with Governor Cuomo over policy and budget issues.

Despite the controversy surrounding the New York governor’s order to get the homeless population off the streets during freezing weather, Cuomo said the purpose of the edict is to save lives and appendages from frostbite, hypothermia, as well as other complications from exposure to freezing weather conditions, such as pneumonia, cardiac issues, and amputation.

While Cuomo’s measure is grounded in good intentions, implementation of the order could prove challenging on several fronts. For instance, police in smaller regions of the state likely will not have the experience that law enforcement in New York City have in interacting with the homeless population, so the potential for miscommunication and/or danger involved in these interactions is higher. Other challenges could come from homeless individuals removed from the street who later contend in court that they were not a danger to themselves or others. It has been suggested that the criteria of “danger to self” could apply when someone demands to stay outside when weather hits sub-zero lows. Furthermore, advocates have stressed that the authorities must show respect for homeless people’s rights and personal property if they expect this mandatory order to succeed. While Cuomo has said that he will defend the measure’s legality in court, if necessary, only time will tell how successful or how much resistance to the order there will be among the indigent population and those responsible for its enforcement on a statewide level.