By Tricia Manalansan on February 15, 20164 Comments 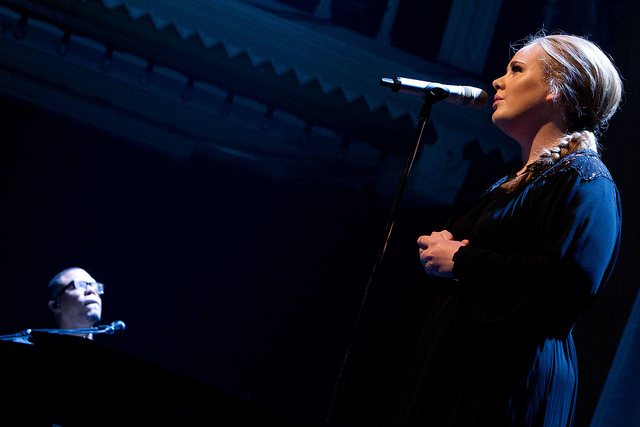 British singer and songwriter Adele has been quiet, staying out of the media since her last record-breaking album, 21, which was released in 2011. Despite her long absence, the international artist made a comeback this year with her newest album, 25. Adele will be making her third U.S. appearance in over three years as she says Hello at the 2016 Grammy Awards. Other music icons will also be performing at the annual event. The Grammys are scheduled to air on Monday, Feb. 15, 2016, at 5:00 p.m. PST, from the Staples Center in Los Angeles, Calif.

Performances at the 2016 Grammy Awards

Adele will be among the music icons who will perform at this year’s Grammy Awards. She surprised the nation when she released her newest album, 25, on Nov. 27, 2015. However, one month before that, she had confirmed a one-night-only concert for Nov. 17 at the Radio City Music Hall in New York. This concert introduced her new songs and previewed the beginning of another successful album.

The album 25 sold 3.38 million copies in the U.S. and over 800,000 copies in the U.K. in just its first week. The album’s biggest hit, Hello, reached No. 1 in almost every country that it was able to chart in. Among these charts was the Billboard Hot 100, where it notably became Adele’s fourth single to reach number one. Hello was also the first song that sold over a million digital copies in one week.

Adele will officially say Hello to the U.S. at the 2016 Grammy Awards, which will also kick off the international tour for her album, 25. Adele Live 2016 will begin on Feb. 29, 2016, in Belfast, Northern Ireland. The tour will end in November 2016, before which she will travel throughout Europe and North America to perform 105 shows. She announced the headlining dates on Nov. 26, 2015, and after tickets were made available in the U.K. on Dec. 4, many venues instantly reported sell-outs, which resulted in extra dates being added to the itinerary. The North American dates were announced on Dec. 14 and will include six shows at both the Madison Square Garden in New York and the Staples Center in Los Angeles. Adele will perform 49 shows in Europe and 56 shows in North America.

It is unknown if Adele will perform Hello at the 2016 Grammy Awards, as another single from 25, When We Were Young, has been recently climbing the charts. The single was released on Jan. 22, 2016, and has reportedly sold over 150,000 digital copies in the U.S. Due to the timing of her album’s release, she did not receive any Grammy nominations this year, however, Adele has won 10 Grammy Awards in the past.