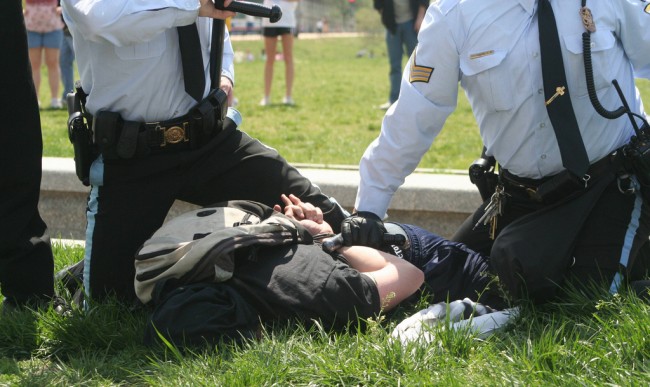 A Ku Klux Klan rally burst into violence in Anaheim, California, on Feb. 27, 2016. The Los Angeles Times reported that three people were stabbed and 13 arrested. Earlier, a small faction representing the Klan had announced that they had plans to hold a rally at Pearson Park, in Anaheim, on Saturday, Feb. 27, 2016, at 1:30 p.m. PST. In reaction to the announcement, several dozen protesters entered the park at approximately 11 a.m. PST.

The Los Angeles Times also explained that police reports described escalated tensions when several men in dressed black and holding Confederate Flags had entered the rally. The men were then escorted to the outer edges of the park by local police. Soon after, protesters were seen kicking a man who was wearing a red shirt that read “Grand Dragon”. Witness statements were consistent in describing events where a man was stabbed with a flagpole by a Klansman. During his arrest, the Klansman declared that his actions were in self-defense.

Reuters explained that the Ku Klux Klan in not a stranger to the Anaheim area. As far back as 1924, the city experienced Klan members elected to public office. During the same period, membership in the Klan grew to 1,200. At the time, affiliation with the Klan had been viewed by the community as a manifestation of civic duty. Ideologically, the Klan capitalized on a combination of nativism, anti-Semitism, and other separatist visions that were gaining acceptance during this time period. In recent years, the group’s activities have been minimal.

A Ku Klux Klan rally bursting into violence is certainly not a surprising headline, given their history. Having been born out of the aftermath of the American Civil War, the Ku Klux Klan had its national membership grow to great heights with the release of D.W. Griffith’s film, Birth Of A Nation, in 1915. The United States National Archives and Record Administration have on file the pamphlet, ABC of the Invisible Empire, which was published in Atlanta by Simmons in 1917. It identified the Klan’s goals as to protect the solemnity of the home, propagate white supremacy, as well as to teach and faithfully inculcate a high spiritual philosophy through an exalted ritualism while upholding principles of their view, which is known as “Pure Americanism.”

The Los Angeles Times account of the events in Anaheim include statements by Brian Levin. Levin is director of CSU San Bernardino’s Center for the Study of Hate and Extremism. Corroborating the specifics of the actual events, he is also critical of the lack of police presence as the violence began. Many other witnesses have demanded to know why local police did not anticipate the possibility that the assembly would not stay peaceful. Orange County Police have yet to release an official statement.

Designated as a hate group, the Ku Klux Klan encounter many citizens who express opposition related to their official ideological position. Events in Anaheim are the most recent confrontation that exemplifies this. Events hosted by the Ku Klux Klan, while unsettling to most, are protected under the United States Constitution’s First Amendment. The Supreme Court case often cited in support of hate groups being permitted to publicly assemble is the Skokie case. In this case, members of the Nazi Party of American petitioned to march in Skokie, Illinois. This community had a population of approximately 70,000, with 40,00 of whom were Jewish. Community members sought a court order that would prohibit the march on the grounds that the event would incite and promote hatred against the Jewish community. In the end, the court ruled that suppressing the voice of the Nazis would be more injurious to Americans then allowing the event to occur. Many judicial scholars point to the Skokie case as having exemplified a profound commitment to the expression of free speech, even though the speech being protected is not generally seen in a positive light.

A Ku Klux Klan rally bursting into violence, unfortunately, is more the norm rather than the exception. Most agree that the incendiary brand of speech used by the Klan is unacceptable. Few would support the views of the Klan. However, violence in opposition to them is clearly not the answer. If a nation is to become truly inclusive, all voices require acknowledgment, even the ones many do not agree with. Listening to messages that these groups voice is worthy of consideration. Rallying against hateful speech as a community then would deflate its appeal. As the nation grows to be more inclusive, voices like these will fade away as evidenced by their consistent decline in membership. Regardless, there will always be those who thrive on bigotry and ignorance. However, there is a great strength in numbers. Tolerance and inclusively need to be voiced in great numbers if the country is to expedite the demise of groups like the Klan.