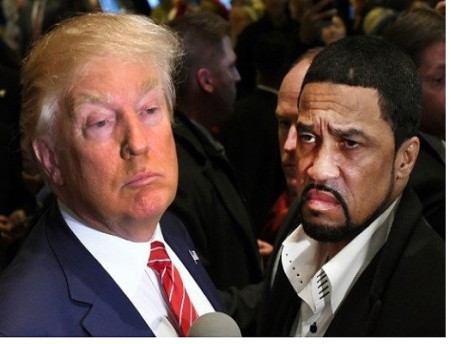 On Saturday, March 12, 2016, Pastor Darrell Scott of New Spirit Revival Center Ministries in Ohio spoke to the crowd before Donald Trump arrived from his earlier rally in Dayton. This is perhaps one of the best candidate introductions ever. An amazing moment as Scott championed the Republican front-runner at a campaign rally and introduced him in such an eloquent manner. In the words of many in attendance, the pastor brought the house down!

Scott and his wife Belinda founded New Spirit Revival Center in February 1994 with only four members. It has now grown into a ministry supporting thousands upon thousands of members to date and has expanded into a multifaceted ministry reaching souls both locally and abroad. The pastor’s speech began as follows:

I want to give you all a little backdrop of my relationship with Mr. Donald Trump. I met Mr. Trump over five years ago in a personal meeting that was organized by a mutual friend. To be honest, I entered the meeting with an opinion of him that had been formed through media portrayals. In that meeting, I asked Mr. Trump some very pointed and direct questions about race and race relations. I received very direct answers that erased all of my preconceptions.

Pastor Scott went on to explain that the presidential hopeful expressed his concern over the condition the country was in and the direction in which was headed. Reportedly, Trump asked Scott and the others in attendance to pray that God would give him wisdom and lead him in the right direction in his decision-making processes. The minister said he left the meeting with a very different perspective and opinion of the celebrity personality. He went on to say:

Now some of you may be surprised at the statement I am about to make, but I found Mr. Trump, not only to be very gracious and hospitable but a very humble man. He is very, very respectful of the clergy.

To thunderous applause, Scott went on to explain how he developed a friendship with Michael Cohen. Mr. Cohen is, not only the man behind Trump, who also voted for President Obama in 2008 but the business mogul’s chief political advisor and an executive at the Trump Organization. When Cohen informed Scott that the former Celebrity Apprentice host wanted to run, he immediately responded, again to overwhelming applause, “Tell the big guy I’m in and I am all the way in!” The crowd went crazy as the Cleveland pastor brought the house down.

It was not long before the pastor shifted gears and began preaching about the things Trump would do to “make America great again.” In a cadence true to the traditional preaching style of many African-American ministers around the globe, Scott shared the presidential hopeful’s intentions and creditability as the front-runner. He celebrated that fact that those in attendance were free thinkers, as opposed to the brainwashed dummies the media has tried to portray them. He encouraged their efforts as he pushed Trump’s agenda forward.

The GOP Presidential candidate is hoping to take the state of Ohio during Tuesday’s voting process. On Saturday, he spoke to a massive crowd of supporters at the IX Center after a grand introduction by a Cleveland pastor. The outcome of tomorrow’s polls may or may not result in favor of the business mogul, but one thing is certain. Pastor Darrell Scott brought the house down in efforts to persuade an audience of 29,000 to vote in favor of Donald Trump.