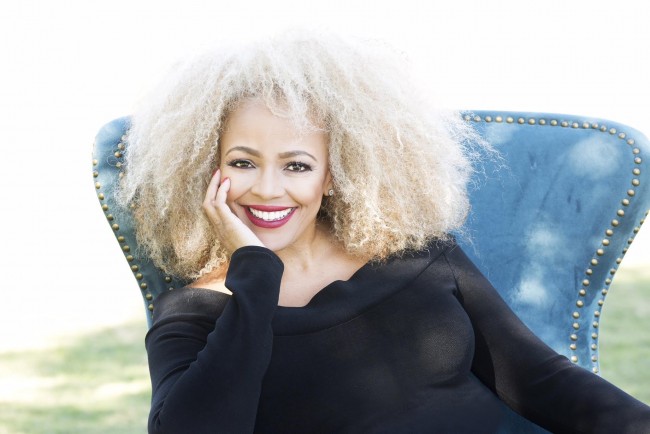 Reality TV-newcomer Kim Fields, of Dancing with the Stars (DWTS) and Real Housewives of Atlanta (RHOA), is evidently not equipped to handle the heat of show biz, especially when it comes to rumors that her husband is gay. When agreeing to join the cast of Bravo’s hit reality show, RHOA, Fields and her husband Christopher Morgan possibly thought the show would revive their careers by making them relevant again. Many fans believed Morgan, a theater performer, and Fields, a child star, joined RHOA for financial reasons and DWTS for career resuscitation. While sacrificing their souls and privacy for the almighty dollar and fame, they did not anticipate the flood of rumors that would surface and ultimately consume them – to the point of reportedly quitting the The Real Housewives franchise.

Fans fell in love with Fields before DWTS when she was just the cute kid on the Mrs. Butterworth maple syrup commercial and the hilarious little Tootie, rolling around on roller skates because she was too short, on The Facts of Life. Fields grew out of her skates and landed a role as Regine on the 1993 hit sitcom Living Single with actress Queen Latifah. She dropped out of sight after Living Single ended in 1998, taking small roles here and there. She dyed her hair platinum blond with an orange hue and took on a bohemian style of dressing. She married Morgan in 2007 and gave birth to sons Quincy and Sebastian. Long time Fields fans were very surprised when she resurfaced after so many years of not being in the limelight, to appear on a show like RHOA. Known for its mud slinging, shade throwing, and hair pulling, the highly-rated reality show highlights affluent, strong women succeeding in business, but not without aiming at one another’s throats. Fields wanted in.

After observing the success of around-the-way girls such as NeNe Leakes and Bethenny Frankel, who went from living check-to-check prior to signing contracts with Bravo to becoming the wealthiest women in the franchise, fans of Fields can understand why she made the strategic move. Leakes, a DWTS alumni, rolled with the punches and took the heat as the public ripped her apart on the reality show. Fields, however, was not prepared for her life to be under a microscope. Like many couples who sign up for reality television, Fields and Morgan were instantly under attack as the cast members, as well as millions of viewers, questioned Morgan’s sexuality. Fields, who was already accused of being sheltered, out of touch, self-righteous, arrogant, and boring, as well as of hiding behind her husband and children to keep from facing the real world, denied the allegations that her husband is gay. Morgan’s reaction and response to the gay rumors, many viewers believe, looked guilty and suspect. Some of Fields’ cast mates at the Real Housewives of Atlanta Reunion had looks of pity for the child star, believing her to be living in denial and that one day she will discover what might or might not be in the closet.

Though it was reported that Fields quit the Bravo franchise because they ignored her request to have the gay rumors edited from the show, according to OK Magazine, Fields is considering returning to the show. A good percentage of Hollywood celebrities have been accused of being gay. It comes with the territory. Fields and Morgan, however, could not take the heat, fearing the rumors would have a negative impact on their children some day. While riding the fence on whether or not to bail out, Fields signed up to compete on DWTS instead. As eyebrows raised, questioning whether Fields escaped to DWTS because she cannot handle the gay rumors or if she really has a love for the tango, fans have to wait to see.

Dancing her way into week no. 5 on the highly competitive dance show, according to Glamour, Fields has possibly been a fan favorite. Unlike the portrayal of herself on RHOA as a frumpy housewife who cries when she is away from Morgan for more than 24 hours, Fields exploded onto the DWTS stage strong, powerful, sassy, and full of life. It does not hurt to have a Broadway dancer for a husband to assist with those intricate dance steps while using some extra rehearsal time. Fields has everything she needs to take home the mirror ball trophy. Adding some intensity to the competition, Fox News reported DWTS is switching up her dance partner from Sasha Farber to Keo Motsepe. The judges had mixed reviews of Monday night’s performance, but the fans loved every step.

Whoever Fields is on the dance floor, her reality cast mates wishes she would have been that character in front of their cameras. Expecting to see a bold Regine from Living Single, the RHOA ladies forgot that a writer created the quick-witted Regine. The DWTS darling, in real life, cannot handle confrontation, nor the rumors that her husband is secretly gay. Her fans believe it was best that Fields left the reality show. She simply did not fit in. The only thing she seems to handle well is losing herself in a performance as someone else. She is a phenomenal performer, but no one has any idea who Fields really is.