South Africa Cursed With the ANC 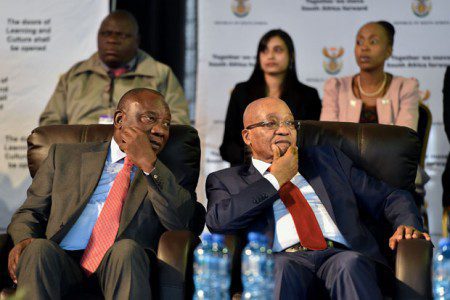 The narrowing and deepening morally depraved circle of corrupt leaders of the ANC are rewarded by the willingness to follow the traveling circus of looters. Members of the ANC have long been on a path of purging members of the party. Where are the integrity and honesty? It is the vote-buying and rigging of elections that are the dominant method of grabbing power.

The ANC lacks direction and, in desperation, tries to cover up mistakes of their own making. Who in the ANC is presidential material? The ANC is singularly lacking in any competent leadership. A strong, decisive leader is needed; one who can make decisions in order to nip problems in the bud and who will escalate solutions before problems arise – not a giggling president. A leader is needed who will prevent socioeconomic decay and stop the disorderly, violent Parliament that has become inefficient and useless to the nation.

The ruling party is dragging South Africa into a pit of horror and until the current supporters and leader are replaced, all hope is lost. A leader who is committed can transform the ANC from a thoroughly corrupt party to a respectful, honest party. The ANC needs a transformational leader and co-leaders who share the value of clean government; a leader who will make an impact on the corrupt culture that is throttling the ANC government. However, the influential people in the ruling party, who have a vested interest in the prevailing culture, will not want a transformational president.

Cyril Ramaphosa, the deputy president, might ascend to the higher office, but will only govern with the authority of that office and without the requisite political power. It might make Ramaphosa vulnerable. Will Ramaphosa be left with no option but to continue playing ball, filling the outstretched hands with money? It might be the only way to secure the highest position in the land. South Africa needs a real leader who is a strong negotiator, has an understanding of economics and remains competent.

Ramaphosa is a typical politician whose interests are self-development, and he will use any functional method known in politics. If that means lying to the constituency and electorate, so be it. It is a challenge with many revolutionary parties across the world. Ramaphosa knows how to play politics, in particular with the financial power amassed. The Democratic Alliance (DA), the official opposition party, says that Ramaphosa is like Zuma and will always put the ANC first. The DA lashed out at Ramaphosa for voting to keep Zuma in power during an impeachment debate.

It is personal ambitions that drive the ANC, and members are there for self-enrichment. This is the price of greed. President Zuma is a real embarrassment to South Africa. Nobody dares challenge the president, and Ramaphosa, who might be a capable leader, is hiding in the shadow of Zuma. Should Ramaphosa ascend into power, it will be with baggage like the Marikana massacre, and there will be no doubt that the ANC, under the leadership of the deputy president, will continue to ignore the poor. South Africa will remain under the curse of the ANC.