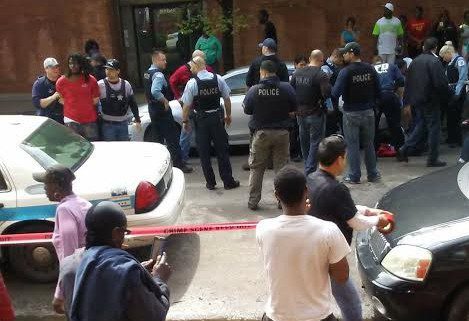 Guardian Liberty Voice video journalist, Untrail D. Boyd, has provided the publication with another breaking news shooting on Chicago’s Westside. This time, a 17-year-old male was shot and subsequently injured outside of the Lawndale Community Academy. The specific location appears to have been 13th and Lawndale. The shooting took place on May 10, 2016, at approximately 2:55 p.m. CT.

According to witnesses at the scene, the unnamed black male was shot in the leg as he stood across the street from the school. The teen was rushed to Mount Sinai Hospital soon after the shooting transpired. One young 13-year-old eyewitness intimated to our reporter at the scene that a car pulled up and a young black male “got” out and started shooting. Once the shooting started, the witness told the reporter that she took off running in the opposite direction.

Lawndale Elementary Community Academy is a public school in Chicago, Illinois. It has 477 students in grades PK and K-8. The Fredrick Douglass Branch Library sits a block and a half northeast from where the shooting occurred.

This shooting incident took place just four blocks from last Friday night’s gunfire which injured a 16-year-old black male. He was also shot in the leg and taken to Mount Sinai Hospital, where he is currently recovering.

The video below reveals events unfolding following today’s shooting. It is not known if the man in police custody, wearing a red shirt, had anything to do with the crime. However, in the chaos that followed the shooting, it appears that he may have been involved.

This publication will report updates on this story as soon as they are made available.

Note: Guardian Liberty Voice is processing two of three additional videos that were taken during the mayhem that followed the shooting. The publication will publish these videos in an updated story within the hour.