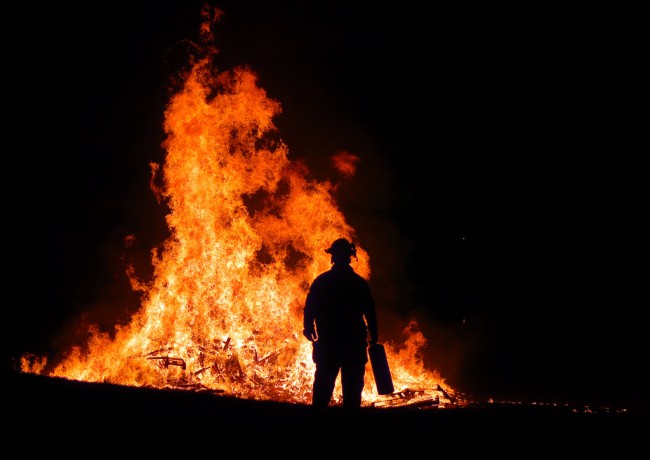 Joe Hill celebrated the release of his latest book, “The Fireman,” which just came out days ago, by coming to Strand Bookstore in New York City on Wednesday, May 18. It is his biggest book yet in terms of length, which possibly makes it Hill’s most ambitious writing project to date in his writing career. On Wednesday evening, the day after the book hit bookstores across the country, the horror author, who happens to be the son of horror icon Stephen King, came to Strand Bookstore to do a reading, have a talk, and sign books for fans. Also, he made a point of just having and sharing a little fun with his fans.

In Hill’s latest novel, there is a strange plague, known as Dragonscale. It is a mystery on many levels, as the debate of its origins never is satisfactorily answered. Victims find their bodies covered with strange black and gold marks which can cause them to spontaneously combust. As a result, out of control fires are spreading throughout the world, as well, adding to that sense of this being an apocalyptic end to the world as we know it.

Harper Grayson, a nurse who has seen firsthand exactly what this plague is capable of, finds herself mysteriously infected with this plague that is feeding off of her body. She gets it just after finding out that she is pregnant, and she finds a renewed determination to survive long enough to give birth to simply provide her baby a chance in this new, post-apocalyptic world. On top of having to cope with the challenges of a world being torn apart and literally catching fire, she has to deal with a marriage that is also completely falling apart, as her husband blames her for getting this disease and spreading it to him. He is filled with a rage that burns within, and this threatens to hasten his spontaneous combustion and bring Harper down with him in flames.

However, Harper holds out hope for someone who seems to have figured out a way to squelch the potential fire. He is a mysterious fireman with a British accent, and it strikes her that he might possess a certain knowledge and ability to keep the contagion in check. The question, then, is whether or not she can find him in time to save not only her own life but that of the baby growing inside of her, even as physical evidence of the Dragonscale virus grows on the outside of her body.

Despite the length of this book of over 700 pages, Hill successfully manages to keep the tension rising as the book goes on. While the story of the spreading of a plague that threatens to end life on the planet as humans know it, which would surely be enough to entice many readers, Hill’s main strength as a writer is actually in the building of his characters. They continue to experience the kind of human drama that everyone, including readers of the book, can relate to, and this becomes all the more pronounced due to the backdrop of incredible events which are accelerating the fall of a society breaking apart at the seams.

In the reading that he chose for this particular event, which he took from the middle of his latest released book, “The Fireman,” for his Strand Bookstore audience, Joe Hill describes a difficult predicament for Harper, the main character. She finds herself at a makeshift camp for survivors of this still relatively mysterious epidemic, which infects more and more people over time. She is attacked and humiliated, and warned to take sides in some kind of conflict that she does not fully understand.

After delivering his reading, Hill added a humorous musical interlude, getting three volunteers to play “Hey Jude” on the kazoo while the rest of the audience sang the alternative lyrics that he came up with, which, of course, were themed on “The Fireman.” Then, he took questions from the audience, and engaged in general discussion, often revealing his strong sense of humor. He mentioned that the title of this book was actually taken from a short story by noted author Ray Bradbury, which was published decades ago in a magazine under the title “The Fireman.” This story ultimately became the first chapter of Bradbury’s iconic work, “Fahrenheit 451.” Hill joked that the scraps of Bradbury’s writings were better than his own original work, and therefore, he decided to adopt the name for his own work.

At Strand Bookstore, Joe Hill celebrated the release of his latest book, “The Fireman.”  This book should help to further cement his already strong and growing reputation as an emerging giant in horror fiction. The friendliness and humor that the author displayed during this appearance also helped to cement his status as an accessible and very friendly public figure.

Sources:
The National Post: Joe Hill’s The Fireman pushes its characters and readers to the breaking point with the plague to end all plagues by Robert J. Wiersema
Wired: Joe Hill’s The Fireman is about the apocalypse. Naturally, it’s optimistic by Lexi Pandell
Amny: ‘The Fireman’ author Joe Hill heats up with new novel
Image Courtesy of bryan’s Flickr Page – Creative Commons License