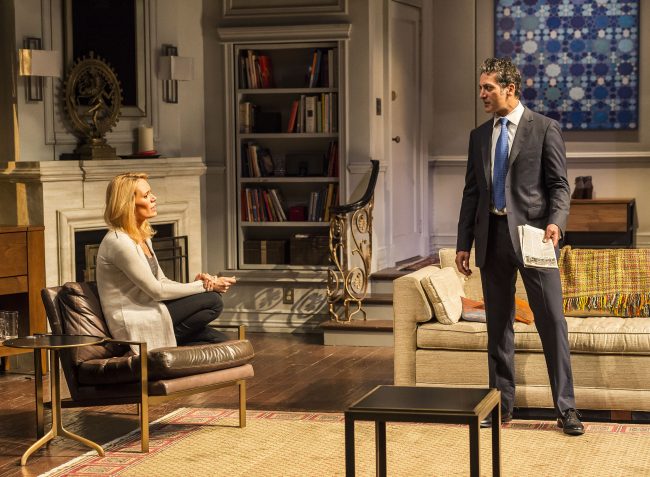 “Disgraced,” the play that opened Sunday, June 19, at the Mark Taper Forum in Los Angeles, is an intelligent, gripping and sensational drama (with lots of funny lines) about Muslim assimilation in America. While the play by Ayad Akhtar debuted in 2012, the subject matter is still highly relevant and interesting given news events in recent weeks.

The 90-minute, one-act play won the 2013 Pulitzer Prize for drama and earned a Tony nomination for Best Play for its look at ambition, religion, race, and cultural identity. Unlike the many plays that have looked at the Jewish- or African-American experience, “Disgraced” mines new territory in the hot topic of Muslim influences and attitudes.

The main character is Amir Kapoor (Hari Dhillon), a high-powered mergers and acquisitions lawyer who is trying to become a partner at his New York firm while distancing himself from his cultural roots. The partners on the letterhead all have Jewish surnames and, while he cannot hide his brown skin, the Pakistani-Muslim Amir has them believing he is Indian and Hindu. The reality is that Kapoor is not even his real last name; it is Abdullah. He tells people his parents were from India, but that is a mere technicality since Pakistan did not exist at the time.

In spite of bad treatment by waiters and airport personnel, Amir tries to convince himself and others that he has conquered any prejudice against his background and “closet jihadist fear.” A self-declared apostate, he resoundingly dismisses his Islamic roots and refers to the Quran as “one very long hate-mail letter to humanity.”

The other characters are:

While Amir acknowledges that his mother would not be proud if he made partner in a Jewish-sounding law firm, he does not completely divorce himself from the responsibilities that family and his former faith impose. His nephew asks him to make an appearance in court in support of the imam, whom he believes in being unfairly accused of funneling money to terrorists. Amir does go and his presence is mentioned in an article in “The New York Times,“ which leads his law firm to find out he is Muslim.

Things come to a boil during the third scene of “Disgraced,” a nightmarish dinner party, where the two alcohol-fueled couples chew up Islamic tenets and each other more than the food. The cast says many things people are afraid to say out of fear of being politically incorrect, particularly their wry, cutting observations on religion. For example, they talk about how the angel Gabriel talked to Mohammed, which led to Islam, and bring up similarities with Mormonism, where the angel Moroni talked to Joseph Smith … and how both religions support polygamy.

As things grow more testy, the characters’ identities and beliefs are peeled away like onions and shown to be more complex and, being a play, dramatic. They show their cultural legacies and emotional baggage. At one point, Amir unravels and even shocks everyone at the table by admitting to pride after 9/11, “that we were finally winning.”

Dhillon is superb as Amir Kapoor in “Disgraced’s” Los Angeles debut, reprising the role he played on Broadway. He is relatable as both the upwardly mobile attorney who changed his name to succeed and later as the man surprised by his inability to deny his upbringing.

Pittman, the other holdover from the New York cast, is also strong in her portrayal of her character’s ambiguities. Like Kapoor, she faces a color barrier, or perceived one, at work and tries hard to assimilate.

Dabu is effective as the young nephew. He shows the struggle with the desire to fit in versus realizations that he may not want to.

The playwright can clearly relate to his “Disgraced” characters. Akhtar was born in the U.S., but is of Pakistani Muslim descent. The Ivy League-educated son of two doctors has written a novel, “American Dervish” about the Muslim experience in America and other works. He admits that the play is derived from an actual dinner party her gave, but it did not unravel as badly as it does in the play.

Director Kimberly Senior has been heavily involved in bringing Akhtar’s work to life. She directed the original production of his gripping look at Muslim assimilation in America, the off-Broadway and Broadway runs and now staged ‘Disgraced’ in Los Angeles through July 17.