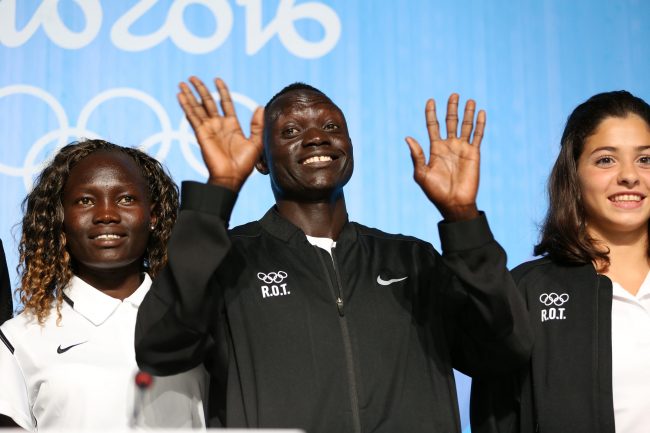 For the first time in history, a refugee team competes for medals at the 2016 Rio Olympics. According to “The Sun,” ten athletes gathered under the Olympic flag to be an inspiration and to send a global message of hope and dedication. They do not have a team, flag or national anthem, but they wanted to be a part of the summer Olympics and to do what they love most.

According to NBC News, the International Olympic Committee (IOC) President Thomas Bach became highly concerned, in 2015, about the refugee crisis that affected a lot of countries such as Syria, Afghanistan, and Congo. Bach developed a plan to help the athletes from those austere areas. To fulfill their dreams, the IOC created a $1.9 million training fund and organized some qualifying stages to select the best potential Olympians.

The concept is not new. In 2012, a marathoner from Sudan, Guor Marial, who settled in the United States when he was a child, participated as an Independent Olympic Athlete. However, never before has there been a team of refugees. Bach believed their presence at the Rio Olympics was imperative to emphasize the gravity of the crisis. “This will be a symbol of hope for all the refugees in our world, and will make the world better aware of the magnitude of this crisis,” the IOC President declared, according to NBC News.

Ten athletes made it to the games, forming a refugee Olympic team that competes for medals in Rio. As “The Star” stated, UNICEF specialist David Ponet affirmed that their presence at the Summer Olympics is “a testament to the challenges and barriers we can overcome through hard work, dedication and support of a global community.”

They are hosted in the heart of the Olympic village, next to the elite of the international athletes, and they have access to all the training facilities. The team includes ten competitors from four different countries, who run in three disciplines:

The team impressed a lot of people from all across the world. Under the hashtag #TeamRefugees, many celebrities, including actors, singers and political figures, expressed their support on various social media platforms. President Barack Obama, the Mayor of New York Bill de Blasio, Ricky Martin, Pink, Wentworth Miller, and Mark Ruffalo are just some of those who manifested their opinions about the refugee Olympic team.

According to AMNY, they believe that the presence of the team in Rio is a proof of the fact that success is not impossible to achieve under any circumstances and that “love, community, and sport have no borders.” Also, through their messages, the celebrities tried to emphasize that the athletes that are making history these days are dreaming “not only of Olympic medals but a better future for all 65 million refugees and migrants globally.”

A Team at Rio Paralympics

Moreover, according to the official website of the Paralympic Movement, a team of refugees will participate at the 2016 Rio Paralympics, in September. The athletes will compete under the Paralympic flag.

Philip Craven, the President of the International Paralympic Committee (IPC), declared that, due to the current crisis, the Games are a great instrument to promote human rights and to “stand for courage, determination, inspiration, and equality on a global stage.”

One Response to "Refugee Olympic Team Competes for Medals in Rio"