As reported by the “Los Angeles Times,” Rogata made use of climbing equipment, including a harness he used while suspended, ropes, and suction cups that are used for construction purposes. He was carrying these items inside his backpack when he entered the building, according to NBC New York. He used an outside atrium of the skyscraper on East 56th Street, as a base to attach the equipment, and continued trying to make his way upward. However, he could not succeed beyond the 21

However, he was unable to ascend beyond the 21st floor, according to the officers of the New York Police Department (NYPD) who nabbed him. The “Los Angeles Times” and NBC New York reported that officers were able to pull him inside the building through a smashed window pane and safely brought him down. However, the entire daunting exercise lasted for almost three hours.

Considering Rogata’s abnormal act, NYPD officials met with his relatives, who, according to NBC New York, stated that he is allegedly undergoing psychological assessment for mental illness. Following this revelation, Rogata, was transported to Bellevue Hospital to have his psychological condition examined.

In speaking to NBC New York, law enforcement officials confirmed that Rogata is 19 years old and from Virginia. The officials learned this information through a YouTube video, that the young man dropped while attempting to climb Trump Tower. In addition, while carrying out the risky activity, the climber spoke to the police officers who were trying to stop him. He told them that he had traveled all the way from Virginia to New York City, on Tuesday, August 9, to meet Trump personally.

NBC New York reported that the video was posted by Rogata, on the day of his arrival, under the name Leven Thumps, a character from Obert Skype’s fantasy novels, written for children. Apart from introducing Rogata, the audio-visual footage also details his intentions and reasons to undertake the perilous and challenging task along. In the video, he claimed that he works in Virginia, as an independent researcher, who appealed to Trump for a personal meeting. He further stated that he had no intentions to harm Trump or anyone else. Citing Trump’s busy lifestyle, as a public figure, as keeping him inaccessible to the common man. This was Rogata’s reason for resorting to such an extreme method to meet the GOP nominee. He concluded his message voicing his support for Trump and urged people to vote for him, as reported by the “Los Angeles Times.” 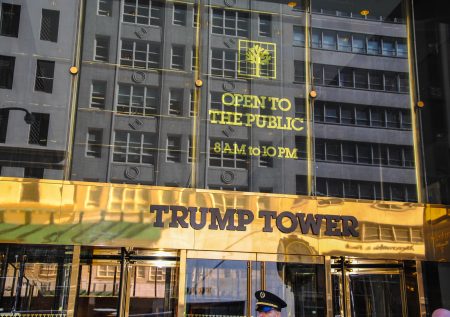 The Trump Tower website reported that the building, riskily ascended by the young man, was designed by prominent architect, Der Scutt. Fox News stated that the skyscraper headquarters Trump’s business empire and houses New York City’s best residential, commercial, and retail spaces. These commercial spaces include the flagship stores of big brands, such as Gucci and Nike.

Meanwhile, NBC New York has stated that the GOP nominee, whose Trump Tower was riskily ascended by the young man, is currently campaigning in Florida. Trump, however, did not mention the incident in any of his speeches or conversations. Later on, he took to Twitter to express his appreciation and gratitude toward the NYPD officials for acting fast and saving the climber’s life.