By Cherese Jackson on September 6, 2018Comments Off on Cussing Pastor Launches ‘Bullsh*t From the Pulpit’ Tour 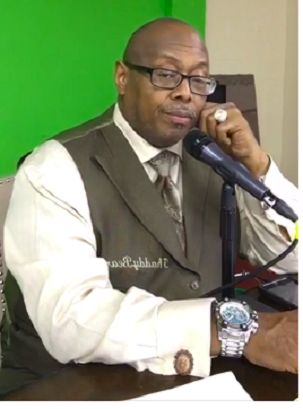 Thaddeus Matthews is pastor of Naked Truth Liberation and Empowerment Ministries in Memphis, Tenn. He has been appropriately nicknamed “the cussing pastor” because his messages are laced with expletives in hopes of getting his point across. Known for over 40 years as a controversial force in the Memphis area and wherever his broadcast can be heard, Matthews is not interested in changing his style nor convincing anyone of its legitimacy. In fact, he has now launched a multi-city tour called, “The Bullsh*t From the Pulpit” beginning in Detroit on October 18, 2018.

According to the church’s website, the church will stand on truth no matter what the opposition, or who it exposes. It will confront social and political issues with education, finance, and community outreach. Naked Truth will not just be speakers of the word of truth but doers as well. The controversial pastor has drawn millions of views with his messages online by interposing them with profane words. To this wise, the minister says he really does not “give a da*n” what traditional Christians think of it.

Matthews continues to prove he is not afraid of using foul language. During a Facebook Live video, he addressed a woman who criticized him for cursing and said:

This coming October, the cussing preacher plans to take his message on the road in what he calls “The Bullsh*t From the Pulpit Tour.” Matthews is on a self-proclaimed mission to challenge the “bullsh*t” spreading in the popular church culture.  He maintains the foolishness is causing many people to turn away from God. In the traditional church, according to Matthews, people no longer attend church because leadership spends too much time talking about giving and less time meeting the needs of the people in society. 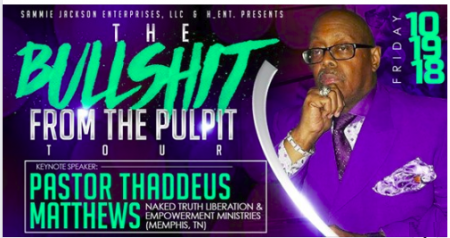 Despite his many critics, social media can’t seem to get enough of the preacher’s explicit sermons. Seemingly, it is not his message as much as it is the delivery that many people have an issue with. However, the cussing pastor believes that God is doing a new thing. He uses profanity to gain the attention of non-believers and once he gains it, the pastor seizes the opportunity to share his faith. He said when speaking of his methods:

You can’t clean a fish until you catch that fish. And what the cussing does, it attracts you to who I am and then I draw you in with a message and the message is that God wants you to have a prosperous life. God wants you to be healthy, and God is not just a God for you just to die and try to go to Heaven.

Admittedly, according to Matthews, this is not anyone’s “grandmomma’s church.” That type of church, he believes, has failed people. It is time for the church to stand up and take accountability for the state of the world. He is not out to attract church people, but those who refuse to attend a local congregation because of the methods of traditional church meetings. The radio host said viewers admire his methods more than those found within conventional church structures.

Matthews has come under serious scrutiny. He has even been badly beaten but refuses to deny his position. While others consider his choice of words swearing, the pastor does not share that theory. He uses profanity to reach people on their level. As a result, the cussing pastor has drawn the attention of millions around the globe with messages that have gone viral. For critics who suggest he is preaching heresy, he says they have not heard anything yet. In October he will be all the way live with the “The Bullsh*t From the Pulpit Tour.”