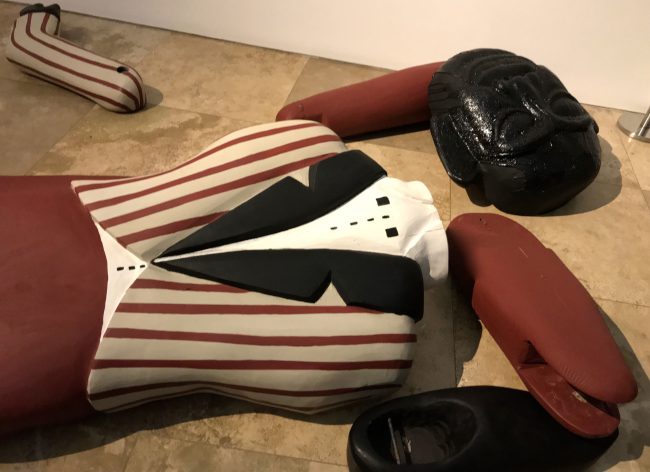 An exhibition at the Getty Research Institute (GRI) adds further fuel to the political fires today about monuments and monumentality. The topical exhibit at the Getty Center in Los Angeles through April 21 delves into the monumentality of historical statues, urban planning, natural phenomenon and government buildings, particularly the role these structures play as symbols of power. While the exhibit overall seems weakly held together by the title, the Getty invites viewers to consider a monument’s meaning can change. It is timely as debates rage over Confederate statues at the same time people bemoan destruction of historic structures in other countries.

Leaders have always erected monuments to commemorate their conquests, tenure and nation. Many of these monuments to ego and hubris did not survive the next administration. One example shown are rare 19th-century photographs showing citizens rebelling during the 1871 Paris commune and toppling a statue of Napoleon Bonaparte erected in 1810 in the Place Vendôme. There are also pictures before (from 1864) and after destruction by ISIS of the Temple of Bel in Palmyra, Syria.

The exhibition conveys various types of monumentality representing systems of belief and structures of power, includes rare historical books, photographs and contemporary art. The oldest monuments depicted are pre-Columbian Nazca lines in the Peruvian desert. The area features ancient geoglyphs created between 200 BCE and 500 CE by the Nazca people and photographed in the 20th century.

One newer objects featured is a deconstructed “monument” by Theaster Gates who is currently the GRI’s artist in residence. For the exhibit, Gates toppled his own monumental work showing a “Dancing Minstrel.” The statue, original shown standing in 2016 reflected the racist stereotype of a black minstrel. As shown currently, the oversized parts of the minstrel lay jumbled on the floor creating a dismantled racist stereotype.

The Getty also looks at monumentality in relation to cities. Extensive photographic documentation of Los Angeles as a monumental city is shown in one gallery. It includes Ed Ruscha’s “Every Building on the Sunset Strip, 1966” which is partly interesting to see how much the area has changed! Lane Barden’s “Linear City” depicts the monumental arteries that flow through Los Angeles (or concrete ribbons slicing through) for water, rail, and automotive travel. There are also design proposals for the never-built Palace of the Soviets in Moscow that were submitted during a major international architectural competition in 1931-1933. 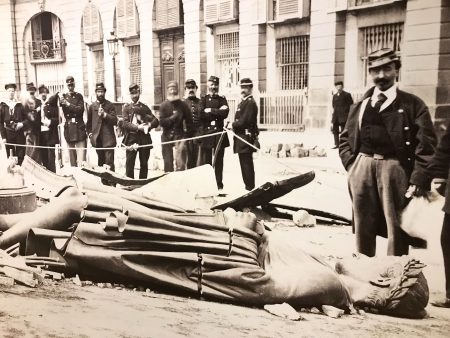 The exhibition illustrates that “monuments, though often meant to stand for eternity, can physically change over time – from erosion, looting, war, or iconoclasm – or they can stay intact but change in their meaning, losing context or relevance, or becoming integrated with daily life in new ways,” said Maristella Casciato, who co-curated the exhibition and is GRI curator of architecture. “Monumentality investigates the ways that monuments are necessarily dynamic, ultimately reflecting, through their endurance or failure, the world around them.”

“Monumentality” also make Getty visitors think of topical monuments in the news, such as damage to the Arc de Triomphe in Paris this month. In reality, many monuments reflect the politics of the period, although the Confederate Monuments came later. The reality is that the United States has toppled statues since its founding. In 1776, after the Declaration of Independence was signed, people tore down a statue in New York of King George III, which may have inspired the toppling of Napoleon shown at the Getty.