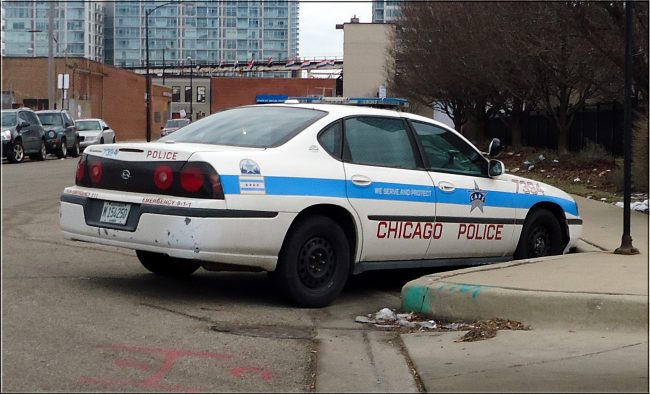 Menelik Jackson and Javan Battle were arrested, in Chicago, Monday night in connection with the fatal shooting of off duty police officer, John P. Rivera, according to a Tuesday morning report in the Chicago Tribune.

Chicago’s top cop, Superintendent Eddie Johnson, tells reporters that the suspected gunman opened fire on “the first Hispanic man” he saw after a minor dispute he had with a group of hispanics approximately one hour earlier.

Johnson said that the “nightmare” started roughly around 2:25 a.m. Saturday in the 600 block of North Clark Street. That is when Menelik Jackson got into a petty confrontation with some Latino men on a party bus at the Rock ‘N’ Roll McDonald’s located in the River North neighborhood.

Jackson left and then returned sometime later with as gun, however, the men were no longer there, Johnson stated.

Chicago’s top cop went on to tell reporters that at about 3:25 a.m. witnesses observed Jackson firing his gun into a parked car located a block away from the initial encounter. The incident left Chicago police Officer John P. Rivera fatally wounded and critically wounded his 23-year-old friend. Both men were taken to the hospital after the shooting. Officer Rivera’s friend is expected to recover.

There were two other men, including another Chicago police officer, in the car at the time of the shooting, both were not injured.

Chicago police are still looking for a 3rd suspect in connection with the shooting. He had accompanied Jackson and Battle to the scene.

During a bond hearing this morning, Judge John Fitzgerald Lyke Jr. ordered both men to be held without bond. The Judge stated that Jackson and Battle posed a threat to the surviving victims “and every other human being on the planet that they come into contact with.”

As recent at Tuesday morning, Chicago police say that the two men in custody could have their charges updated to hate crimes.

Fox news and the Chicago Sun-Times reports that Menelik Jackson, the alleged gunman, had once applied to be a Chicago police Officer. However, while training at the police academy he was arrested in connection with a home invasion. According to the Tribune, the break-in occurred at Janson’s ex-girlfriend’s apartment.

In that case, the victim told police that before Jackson left, he mentioned that he was heading to the Chicago police academy on the Near West Side.

The officers that had responded to the break-in complaint contacted the academy and Jackson was arrested on weapon charges and home invasion.

Funeral arrangement for Officer Rivera will be held at 3 p.m. to 9 p.m. this Thursday at Elmwood Chapel, 11200 S. Ewing Ave., Chicago.