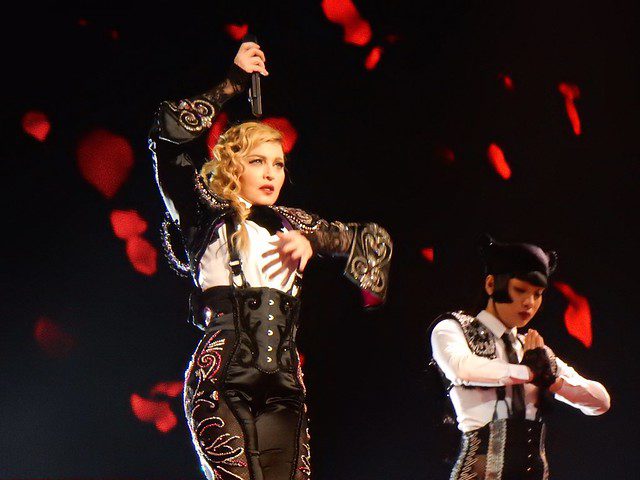 Madonna said in an interview which will be appearing in the June 2019 issue of British Vogue set that she never and a feud with Lady Gaga.

In 2011, Gaga released her single “Born This Way,” and people drew comparisons from “Express Yourself” which Madonna released in 1989.

The Material Girl said in the interview that people get excited about a feud between herself or that they were enemies when it was not valid.

It was reported that the two ended their feud at the Oscars in February.

Gaga had said in the past that she was a Madonna fan. Madonna told British Vogue that she has no role models because nobody does what she does. Madonna continued she could look at freedom fighters such as Angela Davis and Simone de Beauvoir, but they were not like her because they did not have children.

Madonna continued that she has six children and is a single parent, and there is nobody in her position who can do all that she does being politically active and an artist.

60-year-old Madonna said she never had an issue with Lady Gaga. Here is a timeline of alleged drama, which Madonna seems to have forgotten.

September 2011 Madonna tells Le Soir that “As for Gaga, I will not make any comments about the obsessions she has with me because I do not know if Her behavior is rooted in something superficial, or meaningful and deep.”

January 2012 Madonna says in an interview on 20/20 that she thinks Gaga refers to her a great deal in her music. Sometimes, Madonna continued, she believes it is flattering and amusing. She continued saying you can look at it a lot of different ways, and she can’t be angry, because obviously, she influenced Gaga.

Madonna also said when she heard on the radio “Born This Way,” she immediately thought it sounded familiar and felt reductive.

January 2012 she told Newsweek that she though Gaga did a great job redoing her song. She said she recognized the change in chords immediately.

February 2012 the Material Girl, while in Israel rehearsing covers “Born This Way” mashing it into “Express Yourself.”

November 2013 Gaga told Attitude Magazine that she was honored Madonna did her mash-up and sang her song. Gaga continued by saying she was not quite sure what the pop singer’s intention was, but she did not care. She looked up to her for a long time, and she chose to sing her song.

February 2015 The Material Girl said in an interview with Rolling Stone that she felt Gaga ripped off her song. She also said that she did not feel as if Gaga wanted to take her crown.

September 2017 Gaga states in her documentary that she always admired Madonna, and always will no matter what Madonna thinks about her. However, even though she will always admire her, she could not understand why she had to find out on television that Madonna thought she was reductive, and Madonna did not have the guts to tell her in person.

Gaga continued by saying if Madonna had an issue with her, why did she have to go through the press and not tell her in person like an adult.