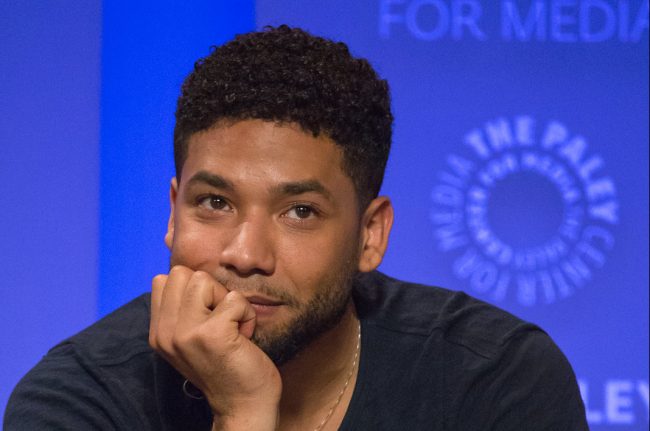 On Wednesday, May 1, 2019, songwriter and singer Joy Villa expressed her disdain for the lack of consequences against former “Empire” star, Jussie Smollett. In a press conference, Villa gave her viewpoint of what she feels should have taken place against the TV star for his actions in March.

On February 22, Smollett reported to the police that a threatening letter was sent to him on the set of “Empire.”  Just two weeks following this incident, Smollett filed a police report saying that he was attacked in the early hours of the day. He claimed that two unidentifiable assailants attacked him near his apartment around 2 a.m, pouring a chemical substance on him while saying racial slurs. The next day, authorities claimed they had two suspects.

After ten days passing with no new development on the case, doubts arose about the validity of Smollett’s report. People began to question his claim and point out changes in his story, which he attempted to defend during his exclusive interview on “Good Morning America.”

Soon after wrongfully accusing two African American men, the police discovered that Smollett’s story was nothing more than a hoax. Upon learning this information, authorities placed him under arrest and charged him with a felony: Disorderly conduct for filing a false report.

While this charge carries penalties of one to three years in jail, Smollett was not charged with the crime. In fact, “Empire” has extended his contract with the show, although no plans have been made for his character’s appearance in the beginning of the sixth season.

Joy Villa considers the lack of punishment to be offensive. She believes that Smollett should have been written off the show entirely. Villa states that the actions taken against him were not even “a slap on the wrist, he got a feather tap over the wrist.” Though Villa expressed her contempt for the situation, the court’s decision was still set and Smollett is now free.

A representative for the actor released a statement to the press suggesting that there may be a slight chance of Smollett returning to the show at some point in the future. The representative expressed Smollett’s gratitude to “Empire” for his contract extension. He added “most importantly he [Jussie] is grateful to Fox and Empire leadership, cast, crew and fans for their unwavering support.”

No one knows for sure what will become of the actor. While it is apparent that there are views suggesting that he was treated with privilege, others may concur that Jussie deserves a second chance.