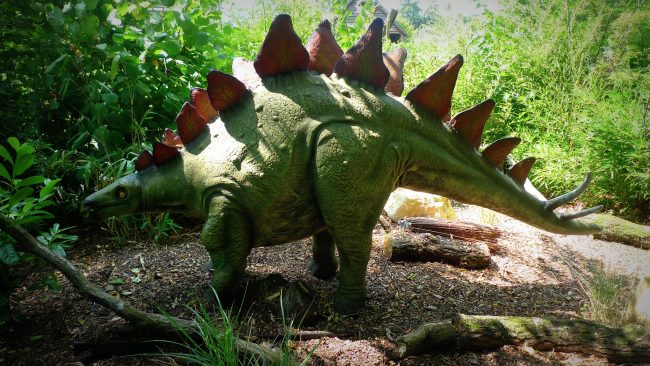 A couple of vertebrae and an upper arm bone of a previously unknown species of stegosaurus were discovered in the Middle Atlas Mountains of Morocco. Despite the fact that only a couple pieces of the spine were discovered, scientists believe the bones are 168 million years old. This is the oldest known stegosaurus found yet.

The neck vertebrae and the humerus bones were extremely similar to bones of other stegosaurus fossils that have been recovered, according to Susannah Maidment, who is the team leader and paleontologist at London’s Natural History Museum.

The research team named the stegosaurus, Adrarklit boulahfa. The name translates to “mountain lizard” in the Berber language. Boulahfa describes the area where the bones were discovered.

Maidment stated, “The discovery of Adratklit boulahfa is particularly exciting as we have dated it to the middle Jurassic. Most know stegosaurs date from far later in the Jurassic period, making this the oldest definite stegosaur described and helping to increase our understanding of the evolution of this group of dinosaurs.”

The stegosaurus was known for the bony plates which went down its back, ending in a spiked tail. It was one member of a larger group of dinosaurs known as thyreophorans. In the past, they were discovered in North America, Europe, southern Africa, and Asia. This is the first one of its kind to be found in North Africa.

Scientists analyzed the fossils and compared them to other stegosaurs, and they published their results in the Gondwana.

It may have been found on the African continent, however, phylogenetic analysis indicated that Adratklit is closely related to the stegosaurs found in Europe, according to Tom Raven, who is the co-author of the study and a Ph.D. student at the museum.

Before this latest find, many of the thyreophoran dinosaur fossils were attributed to rock formations that were associated with Laurasia, the former supercontinent. “The theory suggested the armored dinosaurs were common and diverse on the Laurasian continent.” However, this latest discovery changes that.

Scientists believe this may not mean that stegosaurs were not so common in Gondwana. This may be due to the fact that Gondwana rock formations have been subject to fewer excavations and detailed studies.

There need to be more efforts to search fossils in former Gondwana to help researchers find a complete skeleton of the new type of stegosaurus and showcase the diversity of armored dinosaurs.

Maidment stated, “What is exciting about this is that there could be many more thyreophoran dinosaurs to find in places that until now have not been excavated.”