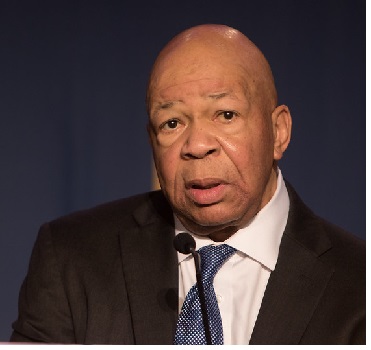 A star has fallen. Maryland Rep. Elijah E. Cummings, a sharecropper’s son who rose to become the powerful chairman of the United States Senate has died. Congressman Cummings was born and raised in Baltimore, Maryland, where he remained until his death. He was 68. Cummings was a formidable orator who passionately advocated for the poor in his black-majority district, which encompasses a large portion of Baltimore as well as more well-off suburbs.

Growing up during the heavily segregated times in America, Cummings began his long push for civil rights at age 11. Having been spit upon and threatened when he and other neighborhood kids tried to get into a city pool, the young activity helped integrate a swimming pool in Baltimore. Cummings recalled how he and other black children organized protests with help from their recreation leader and the NAACP during a recent speech to the American Bar Association.

Cummings obtained his Bachelor’s Degree in Political Science from Howard University, serving as Student Government President and graduating Phi Beta Kappa, and then graduated from the University Of Maryland School Of Law. Congressman Cummings has also received 13 honorary doctoral degrees from universities throughout the nation while dedicating his life of service to uplifting and empowering the people he is sworn to represent. Congressman Cummings often says:

Our children are the living messages that we send to a future we will never see. In that vein, he is committed to ensuring that our next generation has access to quality healthcare and education, clean air and water, and a strong economy defined by fiscal responsibility.

He began his career of public service in the Maryland House of Delegates, where he served for 14 years and became the first African American in Maryland history to be named Speaker Pro Tem. Since 1996, Congressman Cummings has proudly represented Maryland’s 7th Congressional District in the U.S. House of Representatives.

Many consider the congressman to be a natural-born leader. Throughout his career, Cummings used his fiery voice to highlight the struggles and needs of inner-city residents. He believed in much-debated approaches to help the poor and addicted, such as needle exchange programs to reduce the spread of AIDS.

Cummings’ career spanned decades in Maryland politics. He rose through the ranks of the Maryland House of Delegates before winning his congressional seat in a 1996 special election to replace Kweisi Mfume, who left to lead the NAACP.

A star has fallen. Having sacrificed his private life and his youth for people, and remains Baltimore’s best known and loved hero. All in all, Cummings was one of the great moral and political leaders of our time. He is revered among the “House” and is respected everywhere as a vital force in the fight for human rights and racial equality.