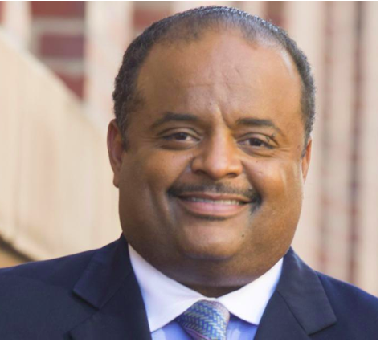 Journalist Roland Martin slams Judge Tammy Kemp in the Amber Guyger versus Botham Jean murder trial. The judge finally breaks her silence on hugging the convicted killer after sentencing. Kemp received a wave of backlash for coming off the bench to embrace Guyger after she was sentenced to ten years in prison for killing Botham Jean in his own home. The judge was criticized by several activists who say she went too far. Social media critics have concerns about whether a black murderer would receive the same treatment. Now, Kemp is speaking out with claims that her Christian faith is the cause.

Martin, on his YouTube show “Roland Martin Unfiltered” expressed his disappointment on how the former police officer was handled, by a judge, after killing an unarmed black man. “Roland Martin Unfiltered” is a daily talk show broadcast from Washington, DC, that focuses on news, politics, culture, entertainment, social justice, sports, education, business, and finance.

In conjunction with Martin and many other criticizers, the Freedom From Religion Foundation has filed a complaint against Kemp with the Texas State Commission on Judicial Conduct. The group said Kemp went too far. Kemp has also been criticized by activists who wonder whether a Black defendant would get the same treatment.

After what many consider a light sentence, two of the jurors were interviewed by ABC’s “Good Morning America” about their decision on Guyger’s sentencing. Their comments have also raised eyebrows and have caused many to question unequal sentencing.

Martin, when speaking about the case, is confused about how the entire conversation about the trial has shifted to Guyger. A black man who sat in his house eating ice cream is now dead because of the actions of a white police officer. Instead, of having empathy for the family or pain for the loss of a man who people only had good things to say about, everyone is worried about forgiving the convicted killer.

The two jurors spoke about the former cop’s remorse during the trial. However, that conversation was shut down by Martin and his guests with claims that anyone facing 99 years would, of course, “show” remorse. Chris Prudhome, a Republican Strategist, said the mindset of the jurors and actions of the judge seemed to place Amber as the victim and not Botham. Dr. Niambi Carter, Howard University Department of Political Science, had added:

In this whole conversation, Botham Jean and what happened has gotten lost. It is all about Amber Guyger. The fact of the matter is she had the weapon and was the responsible party. The victim did not do anything other than being in his own home and Guyger killed him.

The idea of ‘Well, she is sorry’ is the same energy I want them to keep for every other person who enters the courtroom under similar circumstances – charged with murder – saying they are sorry and feel bad. Many people are sorry and feel bad but are not handed 10 years for the murder of another human being.

In a recent interview, Kemp said she believes her actions were appropriate considering the trial was over and Guyger, a former officer, said she did not understand how to begin seeking God’s forgiveness. She added:

She asked me if I thought that God could forgive her and I said, ‘Yes, God can forgive you and has.’ If she wanted to start with the Bible, I did not want her to go back to jail and to sink into doubt and self-pity and become bitter. Because she still has a lot of life ahead of her following her sentence and I would hope that she could live it purposefully.

Guyger asked for a hug twice and after some hesitation and following my own convictions, I could not refuse that woman a hug. I would not. And I don’t understand the anger. And I guess I could say if you profess religious beliefs and you are going to follow them, I would hope that they are not situational and limited to one race only.

During Guyger’s case, which lasted seven days, she admitted under cross-examination that she intended to kill Jean when she shot him. She also admitted that she was trained in CPR but refrained from using it on Jean after she shot him. Instead, the 911 call she made along with her actions following the shooting suggested that she was more concerned about saving herself rather than Jean.

Martin and his guest, Dr. Carter, feel that the treatment which was given to the convicted killer actually cheapens that act of forgiveness. Forgiveness does not dismiss immediate consequences. Carter said:

…Especially for black people. You can slap, punch, kill, beat us and we should just forgive you without any consequences for the erroneous behavior. On the ‘way’ toward forgives are we allowed to be angry and hurt before we forgive?

Martin discussed how long ago the tragedy of 9/11 was and white people have not forgiven anyone. However, black America is always supposed to just forgive and forget the way “we” are treated as the “less than” people of society. Jean’s mother agreed that forgiveness is necessary for her son’s killer, but there are also consequences due to her actions.

The idea of a judge hugging a convicted killer after sentencing ignores the concept of impartiality. Martin slammed the judge for her actions. The host maintains that police officers must be held to a higher standard for killing anyone who is not a threat.

Roland Martin Unfiltered: Did She Go Too Far? Complaint Filed Against Judge For Guyger Hug; Jurors Speak Out On Sentencing
NewsOne News: Judge Kemp Breaks Her Silence On Why She Gave Amber Guyger A Hug