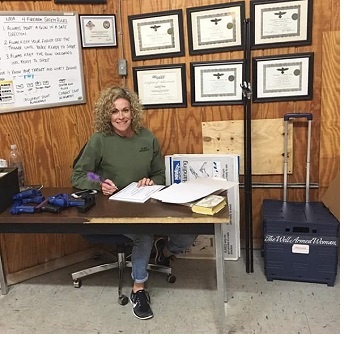 On Tuesday evening, V. Kim Thumel shined as she spoke in support of the city of Virginia Beach’s demand to become a second amendment sanctuary. The movement gained steam in the weeks following the Democrats’ electoral victories in the Virginia Senate and House. The movement to increase the number of sanctuary communities in Virginia has been fueled, in part, by a group named the Virginia Citizens Defense League (VCDL). VCDL is an all-volunteer, non-partisan grassroots organization dedicated to defending the human rights of all Virginians. It has encouraged interested Virginians to reach out to their respective board supervisors and send them a link to a model Second Amendment Sanctuary resolution created by VCDL.

Prince William County Board of Supervisors Chairman Corey Stewart said many Virginia gun owners became worried when state Democrats began to voice their support to introduce more gun control bills in Richmond. Lobby groups are not the only ones who have worked to promote the effort. Some Virginia law enforcement leaders have joined the push for sanctuary status as well.

The Second Amendment of the U.S. Constitution was at the front of the minds of both elected officials and residents on Tuesday night. Virginia Beach City Council will now consider introducing a sanctuary bill soon. A massive turnout estimated at between 1,000 and 1,500 individuals filled the meeting room, down the hall, out the doors and flooded the area at the front of the building. So much so that the City Council Chambers and all of City Hall reached capacity, leaving even more people outside during the meeting. By 6:30 p.m. the crowd had swelled to the point that both the Virginia Beach Sheriff’s Office and police department were on-scene to close down the road down in front of the building.

The gun-rights advocates wore orange stickers saying “Guns Save Lives” in the shadow of Building Two at the municipal center, where six months earlier a gunman killed 12 and injured 4 others. Due to the capacity of the crowd and because comments are not recorded during “open mic” nights it is unclear who all spoke before the council. However, one woman, who shined brightly, was Thumel, an NRA instructor who trains women from ages 18 to 80. Feeling the urge to step up and speak her mind, she spoke with clarity, grace, authenticity, and passion. A portion of the heart-felt message Thumel conveyed is as follows:

I had no intention of speaking tonight as I sat there and listened to everything that was going on, I had to stand up for the other 3500 women I’ve trained in the last three years. I’m an NRA Training Counselor and instructor, Well-Armed Women instructor and chapter leader who has trained all over the country. I have trained women who have been taped up and raped, car-jacked, shot, victims of home invasions, and

domestic violence to name a few. These women are looking for options.

One of the first things that I, along with the other instructors I work with, tell them is this is NOT the first choice, it is a LAST choice. To use a firearm to defend yourself is when you have no other choice!

One of the things that concern me about the legislature at hand is the training aspect. We all know that knowledge is power. If we cannot educate people who don’t have skills in this area, we are really limiting ourselves.

Also, shooting is a sport that is recognized in the Olympics and other things. I just needed to say this on behalf of the firearms training community. We want to instill the best safety skills that we can and stand up for the women in this city and across Hampton Roads. I am an active member of the community and this is something I am very passionate about.

As the founder of +P, Thumel is on a mission to dissolve the victim mentality many people have developed. Her classes are designed to replace fear and worry with awareness and preparedness. For the widow who is ready to pick up her first firearm, or anyone interested in firearms for recreation, self-defense or as a competitive sport, Thumel’s students develop relevant safety and protective skills that reflect her advanced training, and access of the industry’s rapidly changing intel. She works with each student in steps, at their own pace so they can focus on their goals and rewrite their story.

With a female student focus, Thumel has trained over 3500 women. She continues to enrich her various skills by entrusting her training to other professionals in the field as well as reputable organizations. These include The National Rifle Association, Gunsite Academy, TWAW, and other training facilities.