‘Book of Mormon’ Cast Keeps Viewers Entertained, Even While Cringing 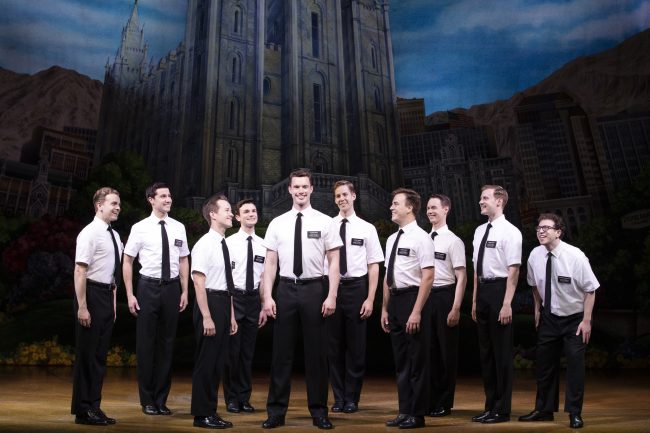 When it opened nine years ago, “The Book of Mormon” was hailed as one of the funniest musicals of all time on the way to Tony Award triumph with nine wins. The still popular show opened in Los Angeles this week at Center Theatre Group’s Ahmanson Theatre for its fourth L.A. engagement. Looking anew at “The Book of Mormon,” however, shows that the cast keeps viewers engaged and thoroughly entertained, but there are now some dated, cringe-worthy portrayals and jokes.

“The Book of Mormon” still features the book, music and lyrics of Trey Parker, Robert Lopez and Matt Stone (the people behind “South Park”and “Avenue Q.”Their songs are still catchy. The humor remains edgy and blasphemous. The show stereotypes everyone, but one cannot help wincing at the depiction of Africa and its people. Actual Mormons, who probably do not like their religion ridiculed, may also object to the depiction of the male missionaries as blatantly gay.

‘The Book of Mormon” is essentially a buddy comedy, about two mismatched Mormon missionaries:

It opens at missionary training school (or “mission control” according to Cunningham). They and their peers practice proselytizing and ringing doorbells to spread the gospel.Their song “Hello” is a great opener, setting the tone. “We’re marching door to door, cause God loves Mormons,  and he wants some more.” The actors in this portion of the show are all white men.

Lost Along the Way

The “Book of Mormon” cast and tone color when depicting Africa. Cunningham envisions scenes out of “The Lion King,” but the creators gave them a backwards village threated by a local military thug and AIDS. This is where the story has not aged well in today’s xenophobic America. The sequences in Uganda are not very funny, especially jokes about sodomizing babies. May jokes present an anachronistic depiction of life in Africa. For example, one young woman (a luminous Alyah Chanelle Scott) in the village treats an old portable typewriter as a texting device, not seeming to know better. However, mobile phone use in Uganda is actually ubiquitous.

While not the Must See it once was, the songs and talent of the entire cast of “Book of Mormon” are entertaining and make up for the cringing bits. The show is not likely to be around in another decade without a serious reworking, but is still enjoyable. It will be at the Ahmanson Theatre in Los Angeles through March 29. The show will then head North to San Francisco, Spokane, Portland and Seattle before journeying to the Midwest and venues further East.

Photo by Julieta Cervantes of the company of “The Book of Mormon,” courtesy of Center Theatre Group.