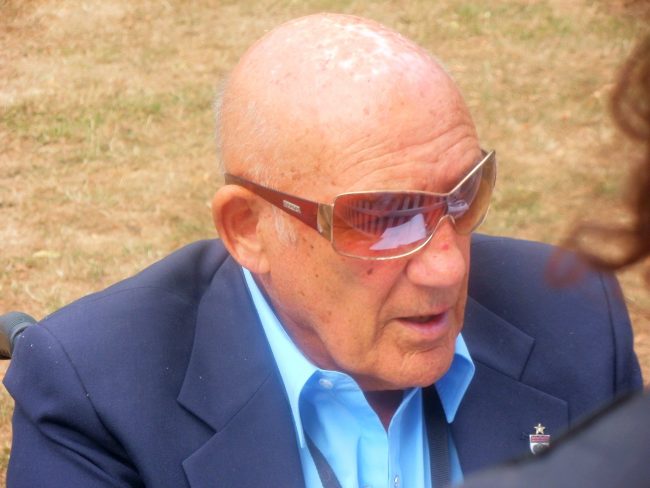 On April 12, 2020, racing legend Sir Stirling Moss passed away at the age of 90. He had a long battle with illness and “died peacefully” in his sleep according to his wife, Susie Moss. She made the comment, “It was one lap too many. He just closed his eyes.”

His Birth and Early Years

Moss was born on Sept. 17, 1929, in West Kensington, London. His love for auto racing started at a very young age. His father raced cars in Indianapolis in 1924 and 1925. Then, his father became a dentist, however, he still enjoyed the sport. Moss began racing when he was 17 years old.

When he was 19, he raced in a Cooper Formula 3 at the Bugatti Owner’s Club Hill Climb, which is located in the Brendon Hills of Gloucestershire. By the end of that year, he won six more races. Soon, he switched to racing sports cars and became legendary fast.

In the 1950s, he won all the major auto racing competitions, except for the 24 Hours of Le Mans. When the World Driving Championship circuit racing began, everyone thought that Moss would win; however, Juan Manuel Fangio, an Argentine driver seized the title.

In 1959, Moss was awarded the Officer of the Order of the British Empire (O.B.E).

On Oct. 7, 1957, he married Katherine Molson and was divorced in 1963. Their divorce happened a year after he was significantly injured in a horrible car crash. Moss laid in a coma for quite some time.

When he finally came out of the coma, he suffered partial paralysis on the left side of his body. This caused him to have a slower reaction time while driving. He was able to recover enough during his many months of rehab to be able to compete again. His first race back was at the Goodwood track on May 1, 1963. During the race, he nearly had a fatal crash, upon crossing the finish line he stepped out of his car saying, “I am retiring.”

Moss was married to Elaine Barbarino from 1964 to 1968, and they have one child together. On April 4, 1980, he married Susie Moss and had a child with her. He was blessed into the Knighthood of the British Empire during the 2000 Queen’s Millennium Honors List for all of his services in the motor-racing industry.

Moss shall be greatly missed by fans all over the world, as well as his former teammates and friends. He is survived by his wife and three children. May he rest in peace.