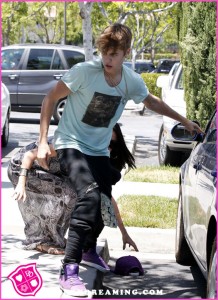 Justin Bieber was reported to have gotten into a scuffle with a photographer Sunday at the Calabasas Shopping Center. Sources say that the photographer was taking pictures of both Bieber and his girlfriend Selena Gomez . The couple had just finished shopping and were next planning to see a movie.  Witnesses claim that the incident quickly unfolded after the photographer, who was blocking Bieber’s car, refused to move and allow the pop star a safe path to exit the center. Bieber exited his vehicle and asked the man to move, which led to the alleged altercation.

TMZ is reporting that immediately following the confrontation and Bieber’s exit, the photographer was approached by an attorney, who informed the photojournalist that he could make a lot of money if he filed a police report.

Sources tell us that the photographer called 911 and complained of chest pains. He also filed a police report with the Los Angeles County Sheriff Department accusing Bieber of assault.

The Los Angeles times reports that detectives would like to interview the singer, who is now under investigation for possible misdemeanor battery.

Though Bieber has not commented on the incident, KABC’s website says that he “took to Twitter early Monday morning to say, ‘gonna focus on the important stuff, the music.’”

Recent stories circling the internet suggest that Bieber was coached recently by former heavyweight champion Mike Tyson and therefore was anxious to display newly developed boxing skills. The Guardian Express has been unable to confirm these reports, so we leave the importance of this information to the reader.