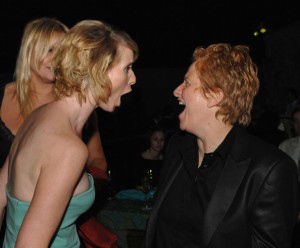 Actress Cynthia Nixon, 46, was legally married Sunday, May 27, to Christine Marinoni, 45. Nixon, the “Sex and the City” star, had begun dating Marinoni in 2004 and announced her engagement in 2009.

Nixon has two children, Samantha, 16, and Charles, 9, from her previous relationship with ex-husband photographer Danny Moses. They were married from 1988 through 2003.

Recently, Nixon was nominated for a Tony Award for her role in Wit, where she played a woman battling cancer.

Nixon and Marinoni were engaged at a rally to legalize same-sex marriage held in New York.

The “Sex in the City” actress wore a custom dress by Carolina Herrera.