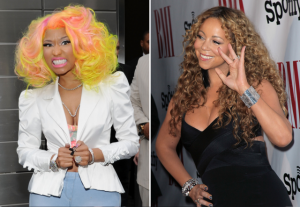 American Idol and its producers have been accused of arranging the serious catfight that ensued on the set of the singing contest last week. Much of the profanity laden shouting match between Mariah Carey and Nicki Minaj was caught on numerous cameras, which remained rolling during the entire incident. The video show the two shouting back and forth with Minaj appearing to be most upset and certainly not faking. The feud seemed to reach its boiling point when Minaj, while cameras were still rolling, hurled a seamless barrage of abusive insults at Carey. TMZ along with several other reports described Carey as being visibly shaken. Thus, it is hard to imagine Idol producers arranged such a disturbing disrespectful exchange between the two judges. Even the show’s senior editor remarked “It’s tough to foresee how fox can proceed with a great deal of confidence to the live shows with these two on the panel.” Slezak also pointed out that “Idol” has never been about nasty infighting among judges. “That’s a different vibe all together and I’d be concerned if I was running the show about whether this toxicity is enough to kill the golden goose?” while after view the video for myself, I was incline to agree with the editor, however, my belief quickly evaporated when I learned more about the backstory between the two “Idol” divas. Now, I am certain “Idol” producers had all along intended to play a dangerous manipulative game with Carey and Minaj for a boost in ratings.

According to a recent TMZ report, Nicki was allegedly “rude” to Carey on the set of the music video “Up Out My Face” back in 2012. Though the video shows Mariah and Nicki happily performing the song together, dressed in identical nurses outfits and red dresses, giggling away and drinking champagne, a Carey friend, B. Scott, who also appeared in the music video with Carey and Minaj, alleges that: ‘Nicki was making faces at her [Mariah] laced with rude comments under her breath. “Mariah went out of her way to be nice to Nicki and make her comfortable,” Scott added, with the website reporting that Mariah felt like she was helping launch Nicki’s career by appearing in the video.

If the show’s executive producer, Nigel Lythgoe was acquainted with this heavily charged information, which he probably was, then it is quite likely that the fix was in, without either party aware of the behind the scenes manipulative meanderings.

Moreover, if my theory is true then the tension rumored between Mariah Carey and Nicki Minaj weeks before the hip hop artist signed her contract supplied producers with 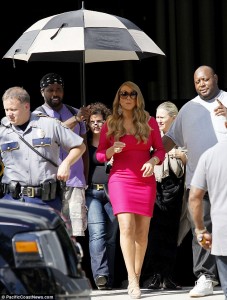 the proof they needed and confirmed for them that Minaj would be a perfect fit in their efforts to separate “Idol” from “The Voice” and “X-Factor.” As first reported by TMZ, a dispute over a contestant’s talent quickly ramped up into an all-out rant by Minaj, who shouted that she’s “not f—in’ putting up with Her F—ing Highness over there.” Carey supposedly added verbal fuel to the contentious argument. A source with knowledge of the ongoing Mariah-Nicki feuding said Wednesday, “This is really starting to get nasty. … A bit of controversy is OK — even good — because it adds spice to the show. However, if it gets too intense and their true dislike for each other becomes obvious — and continuously obvious — then that moves into the uncomfortable stage for the viewers.” And uncomfortable it got as the Mariah Carey vs. Nicki Minaj’s threat to shoot the diva looked to become an old school vs. new school kind of justice.

But no matter how it might appear producers are not happy about the disruption, you better believe that secretly they’re hoping it continues to get increasingly dramatic. Why? Because drama sells, period.

A spokeswoman for Fox and “Idol” declined to comment on the reported dust-up between the two stars, but another source — close to fellow judge Keith Urban — said the country music mainstay was particularly unhappy about the tension.

“Keith is such a wonderful, easygoing, lovely guy,” said the source. “This kind of drama was not the reason he signed on to be an ‘Idol’ judge. … He hates nastiness in any form.”

“Idol” host Ryan Seacrest said Wednesday on his radio show that he loves the bickering. “ ‘Idol’ needs some passionate debate. It did get intense. We want that. … The feedback that they give is very good.”

The blogospheres have been in panic mode ever since rumors of a cat fight between Carey and Minaj began to unfold. Now don’t get it twisted. The two are not literally thumping. It’s just the roar of a veteran diva marking off her territory so that the young up and coming star will recognize her place. However, Minaj is not interested in playing the game and she loudly let Carey know. Nicki feels Mariah has been wasting everyone’s time by constantly praising herself instead of focusing her energy on critiquing the contestants.

But listen folks, do you really think Fox and FremantleMedia are reportedly dishing out $12 to $17 million to Carey for her to dutifully judge their singing competition. Quite the opposite and from their perspective the deal is already paying off, perhaps sooner than they had imagined. If there has been a misunderstanding between the two you better believe the team of producers are trying to figure out how that might be able to fan the flame.

Contrary to popular belief, Idol execs have their ear to the blogosphere as they attempt to find a reasonable way to control the controversy to their advantage. 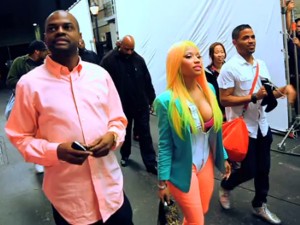 As I alluded to in the beginning of this article, the rumors swirling about weeks before Minaj was signed provided enough information to Idol’s higher ups that motivated them to quickly get Minaj under contract. During that period, Carey reportedly threw a hissy fit over the idea that Nicki Minaj might be joining her at the judges table on “Idol.

The report was published on Aug. 14, 2012 by AP. It reads: “A source close to Minaj said the singer-rapper has been in talks to judge “American Idol” and that a deal is in the works. The person was not authorized to publicly discuss details and spoke on condition of anonymity.” Given AP’s track record and high standards, the probability that a deal is in the works is very high.

The news from AP appears to have triggered a response, which reported Carey as being livid over Minaj’s deal. Though no official word was given confirming Minaj it sparked some controversy.

The idea that Carey was under the impression she would be the only female judge might have been true if the popular singing contest planned to employ three judges.

However, it appears company decision makers were considering a business model that called for four judges to shake things up a bit and potentially enable the show to recapture the dominating prestige it once had before “The Voice” and “The X Factor” joined the ratings fray.

We now know that Fox and FremantleMedia were leaning in the direction described in this article.

Hence, if Carey was under the impression that there would only be three judges seated for the show, her apprehension might be understandable. However, a move to four judges makes sense at this point, considering “The X Factor” and “The Voice,” the latter of which could end up being serious competition for “Idol,” both use a four-judge panel. Therefore, having two female judges would not provide balance; it would be viewed as fair.

This scenario would significantly support the claim that Carey hung up the phone when she was informed that Nicki was this close to parking her enviable bottom right next to Mariah on “Idol.”

A report that Carey was perturbed simply because Minaj is younger now appears to have been true. After all, Mariah is 13-years-older.

There may be more than enough room for both of these divas but who’s going to tell them that. While Carey is a musical legend and invokes an attractive nostalgia, Nicki’s music is current especially among America’s youth right now, making her a perfect candidate to draw in that coveted demographic.

There should be no reason why these two Divas can’t put aside their issues and happily sit next to each other but it appears they have found plenty of reasons to dislike each other.

Thought reports that Minaj allegedly threatened to shoot Carey have been disavowed by Minaj’s team and producer Nigel Lythgoe, another source says that Nicki is convinced producers and member’s of Mariah’s team “are conspiring to get under her skin … because they think a pissed off Minaj will bring in viewers.” It’s so obvious! Give us a pissed off Nicki Minaj, a clearly drunk Mariah Carey and Nicole Kidman staring ambivalently at her nails in the audience while Keith Urban dutifully earns his paycheck and Idol is back in a big way, Fox.

And since we decided to mention Kidman, we might as well through the Tom Cruise line from “Mission Impossible” in the mix as one can imagine Minaj telling Carey you’ve never seen me upset!

In the last 24 hours Minaj appears to be wising up to the probability that she might be part of an elaborate manipulative scheme. The rapper now says she won’t be anyone’s puppet and the next time Carey starts something, she was simply going to walk off the set. Sources told TMZ that Minaj believes the “American Idol” producers were instigating friction between her and the “I’ll Be There” singer.

So is that what’s actually going on? Producers of the show working on the already existing tensions between the two new female judges just to get some drama on the set?

But did they get more than they bargained for, especially with the video of Minaj’s rant? And what about Carey’s claims via Barbara Walters after the two women supposedly talked it out the day before? Why do that after things were settled, unless others are orchestrating things — or Carey truly is that insecure?

Or could Minaj’s suspicions about the producers be the result of simple paranoia?

Some are even going so far as to suggest that the entire incident was staged for publicity.

Conspiracy theories aside, it is a television show — that depends on ratings for its survival and its advertising dollars. Anything — and all of the above — could be possible.