James Holmes is not the “Joker”, he’s a joke

James Holmes is not the “Joker”, he is a joke, another twisted example of how perceived normalcy can quickly disintegrate into a fractured reality. His “work” is already being compared to Columbine and rightfully so. It wasn’t a high school, it wasn’t a two man job, job but it was in fact a production, a trick we have all fallen for. Unfortunately, our rating system is to blame, our media is to blame, our social atmosphere, and our current obsession with doom.

In the Columbine case, Eric Harris and Dylan Kiebold have been placed under the psychological microscope for years. Some pointed to bullying, some pointed to violent video games and movies to pick up the blame, but it was always about something more to the two murderers, it was about relevance.

Harris and Kiebold video-taped themselves plotting and planning, hanging out and listening to “Miserlou” by Dick Dale, the intro theme to “Pulp Fiction”, talking about DOOM, and glorifying other mediums of conjured violence like Natural Born Killers. Kiebold himself planned on attending college to be in video production. The two talked about how Columbine was their prison, and on that fateful day they decided to put on their biggest show, one that is remembered better than most movies, games, or cd’s from that time period. In death, they reached fame, and if Kiebold finished out four years at school, then spent twenty honing the craft of becoming a director, the chances are that he would never reach that same level of fame or notoriety.

James Holmes has some striking similarities when it comes to strategy. Fish in a barrel scenario, where the mentality is not to assassinate a specific person, but to “kill em’ all”. The more dead, the more of a shock wave will go through the media, if you score enough points, you will be remembered as “the orchestrator of the worst shooting in U.S. History”, that is, until another nobody comes along and decides any press is good press. Both situations involved the use of explosives, careful planning, and a sense of no remorse. James Holmes smiles in his mugshot as if he had just received a major accolade that he is humbled by.Holmes also shows the obsession with film, killing at a Batman preview, invoking terror like the nemesis Bane, telling the arresting officers he was “The Joker”. Is this just a schizophrenic who has lost touch with reality? Doubt it. 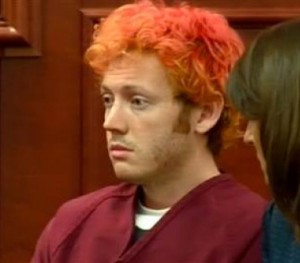 It is the middle of a presidential election, and all we will hear from the media for the next month or so will be this story. Even in the attacks and negative light, they will play right into Holmes’ plan of fame by force. Violence, especially against the average American, gets ratings, so it gets the coverage. This modern obsession is a sick and public version of mass masochism, though some would argue this human obsession stretches beyond newer-age media. The political games will begin, and surely we will learn it is “never too soon” to exploit a tragedy, whether is be for tightening up gun laws, or witch-hunting scapegoats. We will continue to ask the wrong questions and provide the wrong answers.

To me it has become obvious that the best way to handle these situations is to keep the killer’s name anonymous. The media can be intimidated into not releasing the truths about war or various other names and stories that exist, but there is almost a sense of ratings-driven worship for these people. It must stop. If the fame and name is detached from these slayings, they will decrease, at least this style of media-driven murder. It has become apparent that those who have a true problem with being nameless will do anything to be remembered, and have no remorse, because they did something they wanted to, and achieved what they crave. It’s a form of selling your soul to the Devil and never learning how to play guitar.

If James Holmes knew that he spent all of that time bugging his home with explosives, planning out his garb, plotting the attack like a militant for drama and effectiveness, only to be called “the gunman” by every news outlet, my money is that he wouldn’t have done the attack at all. These are events that are not driven by beliefs, they are not sociological, political, or religious, it is violence for the sake of violence, killing the innocent to prove only that you have killed the innocent. So James Holmes, this is all you get from me. You are a nobody, a nothing, a coward, a loser. Perhaps the nerdiest thing I have ever heard is to stage a mass killing of unarmed civilians that circles around Batman, you wimp. Hope it was worth the lifetime of prison reaming, because last time I checked there aren’t many neuroscience students in the big house, and I’m sure all the boys in the pen would love to have their first, sort of like a Redhead.