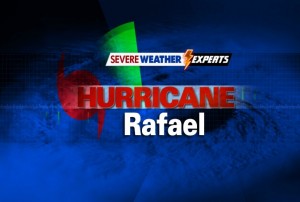 This report was sourced from NWS National Hurricane Center, Miami, Florida; and is a Hurricane Rafael Tropical Cyclone update.

Reports from Air Force and NOAA Hurricane Hunter Aircraft indicate that Rafael has strengthened, and its maximum sustained winds are now near 75 mph. This makes Rafael the 9th hurricane of the 2012 Atlantic season.

A Tropical Storm Warning is in effect for:

A Tropical Storm Warning means that tropical storm conditions are expected within the warning area within 36 hours.

At 5 p.m. EDT, the center of Tropical Storm Rafael was located near latitude 24.1 north, longitude 65.8 west.

Rafael is moving toward the north near 10 mph. A northward motion with some increas in forward speed is expected tonight. A turn toward the northeast, with an additional increase in forward speed, is expected on Tuesday and Tuesday night. On the forecast track, the center of Rafael will pass near or to the east of Bermuda late Tuesday or Tuesday night.

Maximum sustained winds are near 70 mph, with higher gusts. Some strengthening is forecast, and Rafael is forecast to become a hurricane later tonight or on Tuesday.

Rainfall: Rafael is expected to produce additional rainfall amounts of 1 to 3 inches over the northern Leeward Islands with isolated storm totals of 12 inches possible. These rains could cause life-threatening flash floods and mud slides, especially in areas of mountainous terrain. Rafael is also expected to produce total rain accumulations of 2 to 4 inches across Bermuda.

Surf: Swells generated by Rafael will continue to affect the eastern-facing beaches of the Bahamas, Bermuda and portions of the United States East Coast during the next few days. These swells are likely to cause life-threatening surf and rip current conditions.
Next Advisory