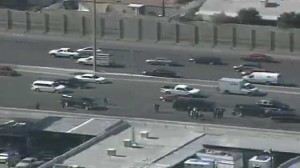 Senate Majority Harry Reid was hospitalized Friday following a chain-reaction crash just after 1 p.m. on I-15 northbound near Sahara, according to Nevada Highway Patrol.

Elliott says a total of six vehicles were involved in the crash.

Reid was riding in a four car caravan, and two cars outside of the senators caravan were involved.

The freeway runs parallel to the Las Vegas Strip.

Elliott says four tow trucks were summoned. It’s not clear whether anyone else was injured.