Amanda Bynes at it again? Denies reports she was butt naked in public 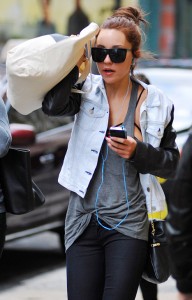 Is Amanda Bynes at it again? Whether deliberate or not, Bynes has managed to keep a semi low profile in recent weeks, staying out of tabloid news stories up until “In Touch” magazine published a report last Thursday claiming the star had been walking around the Beach Bum Tanning salon butt naked. It was the sort of erratic behavior that has typified Bynes’ behavior for most of the year. And it appears to be getting increasingly worse.

Now the self-proclaimed retired millionaire is threatening to sue the tabloid that claimed she was strutting around the NYC salon naked.

The recent “In Touch” Weekly story cited an unnamed eyewitness who said the former Nickelodeon star seemed “totally out of it” as she reportedly walked around the main lobby before returning to a private spray-tan room.

A witness told the magazine, Bynes looked “painfully thin” and that “she seemed totally out of it.”

“[She] didn’t seem to care that everyone saw her naked,” the witness shared. (A store employee countered that Bynes comes in frequently but “is always polite” and “usually just in and out.”)

Bynes wasn’t pleased with the publication’s report and insists the story is completely false.

It’s been reported by “Us” that an unnamed employee of the salon contradicted “In Touch’s” account, saying Bynes frequently patronizes the tanning solon and has always been polite.

In defense of the ongoing controversy, USA TODAY reports “In Touch” spokesperson Lindsay Ferraro saying, “We stand by our reporting.”

But “Employee testimony and security footage have confirmed that Ms. Bynes was not acting inappropriately,” Beach Bum Tanning chief executive officer James Oliver told Celebuzz. “She is a long-time client and we stand by her account.”

After covering Bynes over the last six months, it can be said that Amanda sticks by her stated positions. When she said she would plead not guilty to all charges with regards to her car troubles in Los Angeles, we can confirm that she has done as much. So we have no reason not to believe the retired actress in her threats to sue “In Touch.”

The former Nickelodeon star’s lawyer did not respond immediately to requests for comment.

“I am doing amazing,” Bynes told People magazine in September. “I am retired as an actor. I am moving to New York to launch my career. I am going to do a fashion line.”

The star of “Easy A” was charged with a DUI in June and two counts of hit-and-run in September. But she insists she doesn’t drink. “I am not talking about being arrested for DUI because I don’t drink, and I don’t drink and drive. It is all false,” she told People.

From March 8, 2012, to today, Amanda’s life has been riddled with some fairly erratic behavior.

TMZ first reported: “Amanda Bynes made a HUGE mistake during a traffic stop in L.A. [as]… she blew off the cop while he was writing the ticket and drove away from the scene.”

The website conveyed that Bynes was originally pulled over for talking on a cell phone while driving. The officer approached the car and collected all of Amanda’s information so he could write up the citation.

But Amanda didn’t feel like waiting around … and hit the gas before the cop could hand over the ticket for the actress to sign.

We’re told the cop decided NOT to pursue Bynes because he didn’t feel she was dangerous … and besides, he already had all of her information.

Later that day, Bynes rolled by the police station and signed the ticket. TMZ said that they were told that Amanda was not off the hook for leaving the scene early.

At the time, authorities looked into the situation and will decided Bynes would not be subject to further charges for her untimely exit.

For all practical purposes this incident stands out as the one event that lunched steady flow of regular encounters with LAPD.

The 26-year-old actress was next arrested around 3 a.m. on April 6 in West Hollywood. Authorities said her black BMW struck the rear corner of the sheriff’s vehicle.

Following the incident, Bynes stubbornly refused to take a Breathalyzer or blood-alcohol test, which is how she ended up having her license suspended, according to law enforcement.

Four days later, Bynes allegedly rear-ended a BMW and fleeing the scene, according to TMZ. It took some time before this case caught up with Amanda because there were not any witnesses.

In august, Amanda had a series of accidents, and in Sept. she was pulled over two or three more times by law enforcement.

After being pulled over for the last time in Sept. an officer decided to have the “Hair Spray” star’s car impounded for driving on a suspended license.

On Friday, Sept. 21, 2012, Amanda Bynes faced a very concerned judge, the honorable Elden Fox. Judge Fox officially charged Bynes with two counts of knowingly driving with a suspended license according to MTV.com. Fox’s actions came when he learned she had been pulled over by Burbank, California police officers near the Bob Hope Airport last Sunday morning for not having her paperwork in order, and then, shockingly, she was pulled over just an hour and a half later in the same area, obviously still without a license.

If convicted on both charges, Bynes could spend up to a year in jail.

Considering there’s also a DUI and two hit-and-run charges pending against her too, the ultimate sentence could be worse. And on top of it all, the actress is telling friends and family members she hasn’t done anything wrong, why then would she consider a public acknowledgement of wrongdoing in front of the court.

With all that is facing the beleaguered star it’s comforting to know that, despite it she’s still a multimillionaire.