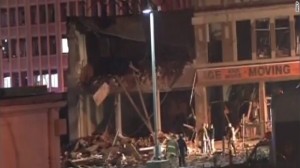 Reportedly the Scores Gentlemen’s Club was torn to shreds following a reported gas leak, officials said. AP says that two Columbia Gas workers were among the injured, and that none of the injuries are critical.

Springfield police Sgt. Richard Randolph said there were no fatalities, adding that those injured were civilians and taken to Baystate Medical Center or Mercy Medical Center.

The club, on Worthington Street, “is like a huge cavity in the road,” according to the Republican newspaper. A day-care center next door and a nearby five-story building were heavily damaged. Windows were blown out 1½ blocks away, and glass littered a several-block radius.

One Scores dancer said she was on stage when the “house mom” came up and told everyone to evacuate. She told the paper she saw smoke when she went upstairs to get her clothes, and the manager than told everyone there to get out, “naked or not.”

The downtown was crowded with holiday revelers, and witnesses say the explosion could be felt four miles away.

According to WWLP-TV a witness in a nearby barbershop heard a loud explosion that knocked him to the other side of the store. He says he saw one building severely damaged.

Springfield is the largest city in western Massachusetts with a population of about 150,000.