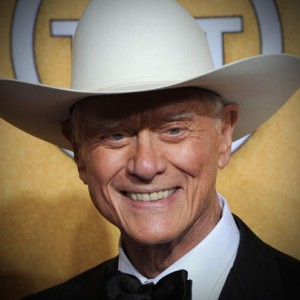 Iconic actor Larry Hagman, known for creating one of television’s most famous villains with the back stabbing J.R. Ewing of “Dallas,” died Friday at the age of 81.

“Larry was back in his beloved Dallas, re-enacting the iconic role he loved most,” the statement read.

“Larry’s family and close friends had joined him in Dallas for the Thanksgiving holiday. When he passed, he was surrounded by loved ones. It was a peaceful passing, just as he had wished for. The family requests privacy at this time.”

Hagman rocketed to television superstardom in 1978 in the role of J.R. Ewing, the scheming, conniving Texas oil tycoon in the prime-time soap opera “Dallas.” He was the quintessential villain viewers loved to hate. Almost overnight, Hagman became internationally famous rivaling some of the biggest stars of the time.

The original strategy behind “Dallas” was to focus on the newly-married Bobby and Pam Ewing. But Hagman made his role more than the producers had intended, and he quickly became the focus of the program.

In 1980, the show became a mega-hit with the “Who Shot J.R.?” plot line that left Americans guessing who pulled the trigger.

The answer came on November 21, 1980, in an episode dubbed “Who Done It?.” More than 350 million viewers tuned in around the world to find out Kristen Shepherd, the sister of J.R.’s wife, shot him. It remains one of the most watched television episodes in history.

Ewing survived that shooting, and Hagman and the rest of the cast thrived for 14 seasons total before bowing out in 1991.

In his memoir, “Hello Darlin”, Mr. Hagman said, “Ronald Reagan was campaigning against Jimmy Carter, American hostages were being held in Iran, Polish shipyard workers were on strike, and all anyone wanted to know was, who shot J.R.?”

The world was filled with J.R. T-shirts, coffee mugs and bumper stickers. “Everyone was making a windfall from J.R. except me,” he said.

He threatened to leave the show if his contract were not renegotiated. After months of tense negotiations, he was finally given his $100,000 per episode asking price. It has been said that Hagman’s contract persistence paved the way for television giants like Jerry Seinfeld and the cast of Friends to get a larger share of the profits from their shows.

He reprised the role for TNT’s reboot of the series “Dallas” in June 2012. Hagman filmed appearances for the show’s second season, which is set to air in January.

It was a role he clearly reveled, even developing a trademark laugh for the character. At one point, Hagman made up fake $100 bills emblazoned with his face and the words “In Hagman We Trust” to hand out to fans.

During the interview, Morgan described the character of J.R. Ewing as “the dark dealer of evil scheming.”

In a statement released Friday by Gray’s publicist to KNBC-TV in Los Angeles, the actress described Hagman as “my best friend for more than 35 years.”

Though he may be best known as a villain, Hagman used his fame to try to give back.

“He was the pied piper of life and brought joy to everyone he knew. He was creative, generous, funny, loving and talented and I will miss him enormously. He was an original and lived life to the fullest and the world was a brighter place because of him,” the statement said.

Hagman told Morgan when he was first approached about doing the “Dallas” remake, the first question he asked: “Are my friends going to be on the show?”
“I wouldn’t be doing it without them,” he said.

Word of Hagman’s passing spread quickly late Friday and early Saturday, with everybody from celebrities to fans mourning his death.

Actor William Shatner took to Twitter: “My thoughts and prayers go out to the family of Larry Hagman. My best, Bill.”

“He was a wonderful human being and an extremely gifted actor. We will be forever thankful that a whole new generation of people got to know and appreciate Larry through his performance as J.R. Ewing,” TNT said in a statement. “Our thoughts and prayers are with his family at this very difficult time.”

Hagman was born in Fort Worth, Texas, on the cusp of the Great Depression to 17-year-old actress Mary Martin and 21-year-old Ben Benjamin, an attorney.

The marriage lasted five years.
Hagman was raised largely by his maternal grandmother while his mother became a famous stage actress.

He inherited the acting gene from his mother, who was a Broadway musical legend.

He spent a year at Bard College in New York and then embarked on a life in theater in Dallas and New York, according to his official website.

He appeared onstage with his mother in “South Pacific” in England and even produced and directed several shows while in the U.S. Air Force. After getting married and leaving the service, Hagman returned to the United States and starred in a number of Broadway plays.

His family then headed to Hollywood, where Hagman earned roles in such television shows as “The Edge of Night” and “The Defenders.”

Hagman’s breakthrough role came in 1965, when he played astronaut Maj. Tony Nelson, or “Master,” as he was known to the scantily clad, 2,000-year-old genie played by Barbara Eden in the hit comedy, “I Dream of Jeannie.”

Through the series’ five-year run, Jeannie found new ways to make Hagman’s life difficult, as she tried to serve her “master.”

“I can still remember, that first day on Zuma Beach with him, in the frigid cold. From that day for five more years, Larry was the center of so many fun, wild, shocking and, in retrospect, memorable moments that will remain in my heart forever,” Eden said in a Facebook post on Friday, shortly after hearing of Hagman’s death.

“…I, like many others, believed he had beat cancer and yet we are reminded that life is never guaranteed.”

Eden signed off, simply: “Goodbye Larry. There was no one like you before and there will never be anyone like you again.”

Hagman kept busy after the show went off the air in 1970, appearing in guest roles in “The Streets of San Francisco,” “The Rockford Files” and “Barnaby Jones.” In the 1990s, he starred in the television show “Orleans.”

So though Hagman continued to work regularly after “I Dream of Jeannie” ended in 1970, it wasn’t until “Dallas” hit the air in 1978, that he again struck a chord with audiences.

Unlike many TV stars, who find themselves playing variations on the same character over and over, the Hagman viewers saw in J.R. Ewing was worlds away from Major Nelson.

While the astronaut was always at wits end, trying to keep Jeannie a secret and trying to prove to the base psychiatrist that he was sane, Ewing was a man who seemed completely in control of his world, wheeling and dealing, backstabbing and cheating on his wife.

Off screen, his drinking earned him unwanted attention from the tabloids, which chronicled his battle with alcoholism.

In recent years, he went public with his wife’s battle with Alzheimer’s.

He also suffered several health scares, including a bout with cirrhosis and a 16-hour liver transplant in 1995 that helped save his life.

Last year, he revealed that he had been diagnosed with cancer, but at the time, Hagman called it “a very common and treatable form.”

Hagman made his home in California with his wife of 59 years, the former Maj Axelsson. Despite obvious physical frailty, he gamely returned to Dallas to film season one and part of season two of TNT’s Dallas reboot.

Friends were in shock Friday, especially those who saw him only days ago. But those close to him say he knew the end was coming and he was glad to have his family in town for Thanksgiving.

“Hagman in his role as J.R. was mythic, and as a human he was a hard-working ambassador for Dallas and the underdog,” Dallas Mayor Mike Rawlings said Thursday night. “I had spent a couple of evenings with him recently … and he always pitched in to help the city.”

Warner Brothers “Dallas” executive producers Cynthia Cidre and Michael M. Robin, and the show’s cast and crew released the following statement: “Larry Hagman was a giant, a larger-than-life personality whose iconic performance as J.R. Ewing will endure as one of the most indelible in entertainment history. He truly loved portraying this globally recognized character, and he leaves a legacy of entertainment, generosity and grace. Everyone at Warner Bros. and in the “Dallas” family is deeply saddened by Larry’s passing, and our thoughts are with his family and dear friends during this difficult time.”

He is survived by his wife, a son, a daughter and five grandchildren.