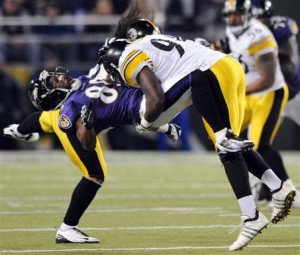 Although they played poorly, the Pittsburgh Steelers defeated the Kansas City Chiefs 16-13 last night in Hines Field. The Steeler’s offensive line was porous on pass protection, and seldom opened holes for the running backs. Last week they soundly defeated the Superbowl Champion New York Giants. This week, playing one of the worst teams in the league, and at home, they had to go to overtime. Thanks to an interception by Lawrence Timmons and a strong kick by Shaun Suisham they survived.

But the worst part of the game was when Ben Roethlisberger was slammed to the ground, landing on his throwing shoulder. He has been undergoing tests. The first reports were that the shoulder was separated. If that were the case, he would be out for at least three weeks. Recent reports say it is a sprain. He is still questionable for Sunday night’s game against the Baltimore Ravens.

In an unusual quirk in the schedule, the Steelers and Raven play each other twice within the next three weeks. In what has become the best rivalry in football, I had hoped to see the best of both teams play each other. There are already two key injuries, one on each team. Linebacker Ray Lewis, guaranteed to be a first round hall of famer is out, and Troy Palamalu, Pittsburgh’s hall of fame strong safety will probably miss at least this Sunday’s game.

Without Roethlisberger, who is the best in football at extending plays, it is a very steep uphill climb to the playoffs.

When the Ravens, who were the original Cleveland Browns, left for Baltimore, the rivalry never changed. Each year they struggle against each other to win the AFC North. And the winner of the AFC North is usually expected to be in the AFC championship, if not the Superbowl. There is no more physical contest in professional football than those between the Steelers and Ravens.

The Steelers have the number one ranked defense in football. The Ravens are usually right there with them, but the last ranking I saw had them at 22nd this year. Their up-tempo offense is scoring more points, but so are the Steelers with their young and fast receivers, and three powerful running backs.

When they play each other, rankings and standings do not matter. To them, playing each other is their Superbowl.