A Strong 5.6 Earthquake has Shaken Papua New Guinea in the Pacific Ring of Fire

By DiMarkco Chandler on December 7, 20125 Comments 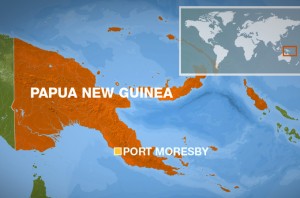 Strong earthquakes are common in Papua New Guinea, the country that makes up the eastern half of the island of New Guinea and the location of the epicenter.

Papua New Guinea is part of the “Pacific Ring of Fire,” an area prone to earthquakes and volcanic eruptions because of friction between tectonic plates.

The strong quake was centered 115 km north-northeast of Mount Hagen, at a depth of 77 kilometres, the USGS said.

The tremor did not immediately prompt any tsunami warnings by the U.S. National Weather Service’s Pacific Tsunami Warning Center or the Japan Meteorological Agency

Earthquakes of this size sometimes generate local tsunamis that can be destructive along coasts located within a hundred kilometers of the earthquake epicenter,” the IOC said in a bulletin. “Authorities in the region of the epicenter should be aware of this possibility and take appropriate action.”

So far there have been no reports of damage nor loss of life.

Papua New Guinea as been rocked with a 6.0 and a 7.1 tremor thus far this year.

The Guardian will keep you posted on this and other seismic activity as they occur across the globe.

Thus far there have been 34 earthquake today, 17 of them in Japan, China fell victim to one, and now Papua New Zealand.

The Guardian will have a full report by Sunday that connects the dots with a comparison with the most recent seismic activity and their relationship with the recent reports of ice at an all time low in Antarctica.