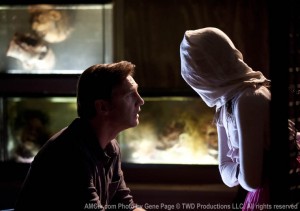 Those of us that enjoy AMC’s the Walking Dead are having withdrawals right about now. The mid-season finale aired last Sunday and there are no more scheduled new episodes until February 10th 2013 at 9pm.

There is a light in the darkness however. AMC has announced that a The Walking Dead Marathon, airing Monday December 31st, 2012 beginning at 9pm, and running until Wednesday January 2nd 2013 at 5am.

All episodes from the first episode in season 1 all the way through the mid-season finale that just aired last Sunday will be broadcast, one after the other. The only thing that could make this any better is if it is commercial free, but don’t bet on that.

This Marathon is a good way for people to catch up on missed episodes, and for people that haven’t had the chance yet to get ZOMBIE FEVER like the rest of us.

So tune in and zombie up.

Until then, watch these 2 videos from AMC, The first, a sneak peek preview of season 3, episode 9, The Suicide King, and the second, a special trailer from When The Walking Dead Returns, on February 10th, 2013 at 9pm.