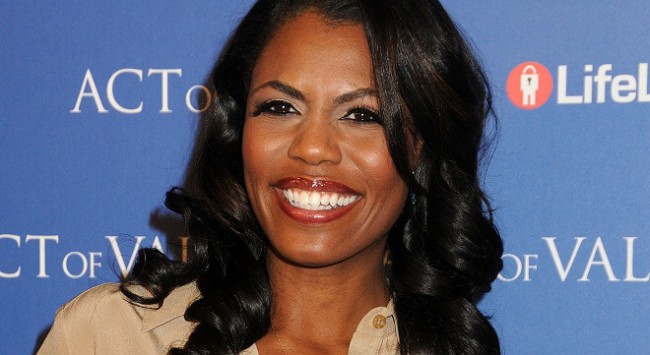 The contestants flew Trump’s private jet down to Orlando for this week’s task, which was to create a 3D display for Universal Studios theme park. Seeing as how he has seemingly spent every vacation in his entire life there, Dee Snider volunteered to be Project Manager for Plan B, while Omarosa stepped up to lead Team Power. Needless to say, Omarosa’s team won. Of course, this being Celebrity Apprentice, the one guy who skipped the task completely, Trace Adkins, was afforded complete immunity. That meant that Dee (who bragged about having been to the park 50-100 times yet still could not come up with a half-decent presentation idea) was a sure bet to be fired.

“Sometimes people think I’m so strong that people forget what I’ve been through. It just means so much to me. I won for the Sue Duncan Children’s Center. My fiance was an alumni of that center,” Omarosa said. After winning as project manager for the task on-hand, Omarosa broke down in tears.

LaToya Jackson stated Omarosa is using this as a card to manipulate herself through the game to soar to the top and win.

Omarosa Manigault was engaged to ‘The Green Mile’ actorMichael Clark Duncan who passed away last September from complications of a heart attack. A native Chicagoan, Duncan credited the Center for putting him on the path to success during his childhood.

After her first stint on the series, Omarosa was voted as the number one villain of reality TV and she may play that ultimate all-time bad girl for television but she is taking this opportunity to raise money for a worthy cause. The $40,000 Omarosa raised as project manager on behalf of the Sue Duncan Children’s Center will bring the center closer to its goal of opening additional sites serving Chicago’s Woodlawn and Englewood neighborhoods. In addition this will help provide additional technology resources for the kids at the original Oakland site.

Meanwhile, who saw Dennis Rodman the game-player coming? After being a mess for his first time on the show, he may have really been the reason Omarosa’s team won. He was smart enough to ask the question to Universal Orlando during the meetings about whether or not they should use celebrities as a selling point, and this was really what guided them along the right path while Dee Snider’s team faltered. The whole North Korea thing aside, we really want to see Dennis do well on this season. He’s an interesting guy who clearly has some business savvy, but is often misunderstood.

The All-Star Celebrity Apprentice (also known as The Celebrity Apprentice 6 or The Apprentice 13) is the sixth installment of the reality game show, Celebrity Apprentice. NBC announced that the show would be returning for a sixth season in 2013. This year’s cast will be an “All-Star” celebrity cast, bringing back many fan favorites to compete head-to-head. There are eight men and six women in the cast. Brande Roderick, Claudia Jordan, Dennis Rodman, La Toya Jackson, Lil Jon, Omarosa and the only previous winner Bret Michaels will be on team Power and team Plan B will have Dee Snider, Gary Busey, Lisa Rinna, Marilu Henner, Penn Jillette, Stephen Baldwin and Trace Adkins.

Celebrity Apprentice winner Omarosa brakes down in tears added by gricelda7 on March 11, 2013
View all posts by gricelda7 →

3 Responses to "Celebrity Apprentice winner Omarosa brakes down in tears"