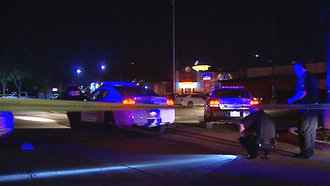 DALLAS, TX. – On 3-14-13 at about 2:18 a.m. an officer was working an off duty job at 2200 W. Northwest Hwy.
An altercation between two groups of people in the parking lot of a restaurant near Club Icon led to gun fire erupting between the two groups.

Two people suffered gun shot wounds. One of the persons wounded is now deceased and the second injured person remains at Parkland Hospital according to a spokesman with the Dallas Police Department.

It is to early in the investigation to determine who actually wounded the two individuals. Multiple witnesses have been transported to Police Headquarters to be interviewed.

According to witnesses, the off-duty officer pulled out his service weapon and fired.

Dallas police are investigating the incident and working to determine who fired the shots that struck the two individuals.

This incident is registered under case#60045-A.