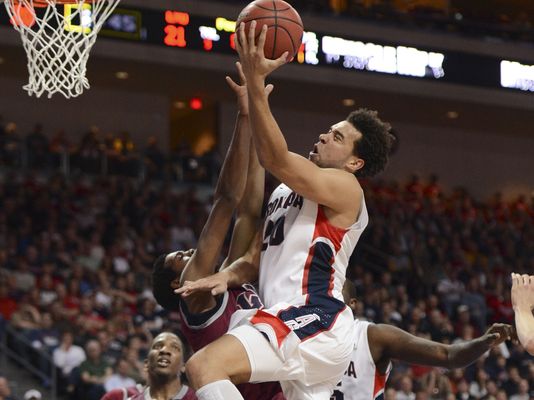 SALT LAKE CITY, Utah – This was a game that was as close as some college basketball fanatics thought it might have been.  Number one overall Gonzaga was facing number sixteen Southern University.  The physical size of both teams indicated the possibility of a good match, and it was.

The game was in doubt until seconds before the final buzzer.  The crowd, sensing a possible historical upset, was buzzing.

Gonzaga coach Mark Few told the media that after he watched the Jaguars of Southern on film, he was well aware that they would force his team to play their best game.

In the second half, I watched the Bulldogs seemingly pull away with and 11-0 run, 7 of which were scored by seven footer Kelly Olynyk.  But Southern proved they were not intimidated.  They went on a 13-2 run, and tied Gonzaga with only 4:08 left in the game.

They exchanged 3 pointers until sophomore guard Kevin Pangos netted a 3 pointer that proved to be the catalyst that gave victory to Gonzaga 64-58.

The western regionals are held in Salt Lake City, and they had the best game of the day.

The “zags” will play  No. 9 seed Wichita State on Saturday in the round of 32.