By Georgina Pijttersen on June 1, 20133 Comments 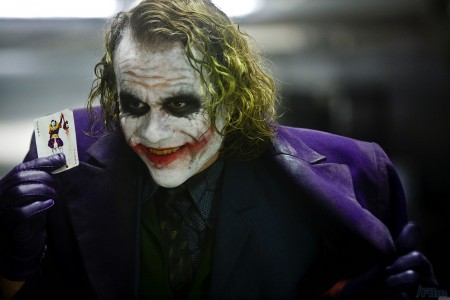 Heath ledger had some dark inner demons going on inside his head, at the moment that he passed away, much, much too soon. It wasn’t a secret that he liked to immerse himself into the character, and almost become one with it. For the first time the public was able to get a glimpse form the diary that Heath kept, during a German documentary, on his Joker Character from The Dark Knight. Heath had revealed that he was writing this diary during an interview with Empire magazine in 2007. He told that magazine that he resorted to solitary confinement, and writing in his dark emotional Joker diary. By writing in this diary, and being alone he could totally transform into the character and become one with it. In his own words: “I sat around in a hotel room in London for about a month, locked myself away, formed a little diary and experimented with voices — it was important to try to find a somewhat iconic voice and laugh,”

He won an Oscar for this role, although he couldn’t bask in it’s glory. At the time of the Award ceremony he had already passed away.

The dark emotional Joker diary was an integral part of a German documentary serie that is titled: Too young to Die. Heath’s father, Kim, revealed the diary, and is seen going through it, and presenting the public with the evidence that his son, Heath Ledger, was very much involved with the character. His father points to a version of the monologue Heath would give to Aaron Eckhart, Harvey Dent, it was written by hand. In the movie Ledger was dressed as a female nurse, in the explosive hospital scene. Kim, Heath’s father, added: “The hospital scene is interesting because when he was a kid, his sister Kate liked to dress him up as a nurse, He was really funny like that.”

Some speculate that his immersion with The Dark Knight sociopath character may have caused him to have psychological issues, therefore preventing him from getting enough sleep. Heath, himself, said the following about this:  “Last week I probably slept an average of two hours a night. … I couldn’t stop thinking. My body was exhausted, and my mind was still going.”  He also said “It’s kind of a rule of thumb for me to self-doubt going into any kind of project. I always think that I shouldn’t be doing it and I don’t know how to do it and I’m going to fail and that I fooled them. I always try to find a way out.

(Ledger sadly passed away because of an accidental pill overdose.)

Michelle Williams, Heath’s ex-wife, said that she knew about this issue but couldn’t have done anything about it. She said: “For as long as I’d known him, he had bouts with insomnia. He had too much energy. His mind was turning, turning turning – always turning.”

The transcript of the video clip, translated from German:

“This is the Joker’s diary. In order to inhabit his character, he [Heath] locked himself up in a hotel room for weeks. He would do that. He liked to dive into his characters, but this time he really took it up a notch. The hospital scene is interesting because when he was a kid, his sister Kate liked to dress him up as a nurse. He was really funny like that. He also was in the movie. This is a makeup test, which was done eight months before. Before the end of the shooting he wrote ‘bye-bye’ on the back of the page. It was hard to see this.”

It’s great to see more of Heath and to know more about the way he used to prepare for his roles. Heath Ledger’s dark emotional Joker diary needed to be revealed in order for the public to remember Heath and his acting genius.