Kim Kardashian 5 Shocking Things You Did Not Know About Her

Kim Kardashian thought she had any signing talent

You probably had no idea that Kim Kardashian thought she had any signing talent. Well she doesn’t, but she did want to help a charity out in 2011. She actually went ahead, and made herself a video. The single, luckily it wasn’t a whole album, was titled “Jam (Turn It Up), and featured Kim in it with background vocals by The Dream. (A singer-songwriter, and record producer.) The chosen charity was St.Jude Children’s research hospital, and they were able to keep half or the sales of the Kardashian single. She did comment that she had no plans, yet, of releasing a full-length album someday soon. This was just a teaser for the other 5 shocking things you did not know about her.

1) Kim Kardashian’s biggest nightmare is giving birth alone in the delivery room. She is afraid Kanye won’t be able to make it on time. A source said the following about West : “very squeamish, and doesn’t want to be around blood,” For sure Kim has nothing to worry about, because maybe Kanye won’t make it, but her whole Kardashian clan will be there. Her mother Kris won’t be squeamish, and is used to be around blood. Mainly because she herself had quite a few babies, don’t you agree?

2) The Kardashian clan however is afraid that Kim will pack up, and leave LA once the baby is born. The reason they are worried about that is, because Kanye is spending most of his time in Paris. It would make sense for Kim to join him there. However her family is not taking it lightly. They want the whole clan to stick together, and to continue filming. This would bring us to point number three of the 5 shocking things you did not know about Kim Kardashian.

3) She wants to stop filming “Keeping up the Kardashians” once the baby has arrived. (It would be difficult to maintain the filming schedule while taking care of the baby, being in Paris, and running around after Kanye.)

4) The Kardashian family feels like they don’t know their Kimmy anymore. They feel like she only listens to the lovers in her life, and right now that is Kanye. Mister West doesn’t want his baby girl to be filmed for any show, and he also doesn’t want Kim to stay in LA. Kim has told her family that she wants to go, and live with Kanye. The family is devastated, and especially her mother is not taking the news well. An insider revealed: “Her family feels like she’s lost herself, Kanye’s asked her to stop filming. And he won’t let the baby be on the show at all. Kris thinks Kim is throwing away everything she’s worked for, for a man.” Maybe Kris might also be thinking of her own net worth and the probability this will go down hill once their super stars in the forms of Kim, Kanye and baby Kimye will move to romantic Paris.

5) Kim Kardashian actually got honoured by the internet folks who like to create memes. (Surprisingly enough the internet folks knew about Kim, and also knew perfectly which scene to use. The beautiful pictures that captured Kimmie crying.) 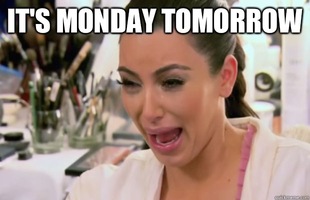 Lets end the list of 5 shocking things you did not know about Kim Kardashian with: she is due to deliver her baby in July. (Maybe that one might not have been that shocking. Lets wait, and see if Kim can change it into something shocking apart from eating the baby’s placenta after its born.)