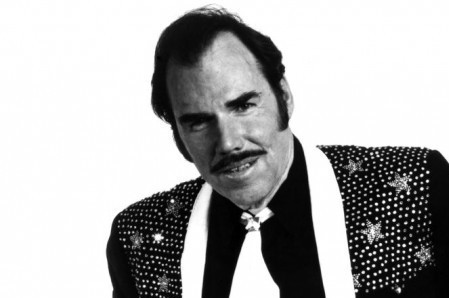 Ottis Dewey Whitman, Jr. (January 20, 1923 – June 19, 2013), who was known the world over as the country music singer/songwriter Slim Whitman, has died aged 90 on June 19. Whitman was a well known high-pitched yodeler and his just as high octave falsetto. He sold in excess of 120 million records worldwide.

According to Whitman’s son-in-law Roy Beagle, he died Wednesday at a Florida hospital of heart failure. He was 90 years-old.

If you grew up watching television in the 1980’s and 1990’s you would have seen the country singers TV commercials which promoted the singer and his albums. The advertisements sold millions of the singer’s records and it was one of Slim Whitman’s songs that saves the world in the film comedy Mars Attacks!

Whitman’s television commercials were the source for many comedic take offs. Saturday Night Live in the 1980’s used to parody the advert on a regular basis, as well as the late night television program the Tonight show, but it was through those commercials that his black slender moustache and long sideburns became his trademarks.

The high yodeling country singer was wildly popular in the United Kingdom where he was called a “pioneer” of country music and it was Whitman who encouraged the young Elvis Presley when the teenager was playing on Whitman’s billed show with his debut.

Whitman’s career stretched over 60 years and he recorded more than 65 albums and sold millions of records. His highest selling record was the collection All My Best that sold four million copies from its telemarketing.

Slim Whitman started his career in the late 1940’s and he obtained an almost cult status with those 1980s and 90s television commercials.

According to Whitman in a 1991 Associated Press interview he was just an ordinary guy who sang love songs. He said, “All of a sudden, here comes a guy in a black and white suit, with a mustache and a receding hairline, playing a guitar and singing ‘Rose Marie. They hadn’t seen that.”

During the 1980s, Whitman was a popular fixture on the Johnny Carson show. Not as a guest, but as the punch line for a lot of the host’s jokes. But Whitman himself didn’t mind. He recognised that his popularity came from those television commercials.

He said, “That TV ad is the reason I’m still here. It buys fuel for the boat.”

Although the world almost never got to see the TV adverts, because Slim didn’t like them. He said, “I almost didn’t do them. I had seen those kinds of commercials and didn’t like them. But it was one of the smartest things I ever did.”

Whitman was a world class yodeler, he yodeled throughout his career and had a three-octave singing range. Whitman said the secret to great yodelling was rehearsal. He said, “It’s like a prize fighter. He knows he has a fight coming up, so he gets in the gym and trains. So when I have a show coming up, I practice yodeling.”

Born Ottis Dewey Whitman Jr. in Tampa on Jan. 23, 1923. He started his “working life” in a meatpacking plant and moved on to several other jobs before he signed on with RCA Records in 1949. Before he got the contract, with the help of Elvis Presley’s soon-to-be mentor Col. Tom Parker, he also worked at a shipyard and for the post office.

Whitman said that it was RCA Records who gave him the performing name of “Slim.” As he was a “slim” 6 foot 1, the company decided that the description was a better name than Ottis.

The newly named singer has his first hit record in 1952 with the song Love Song of the Waterfall and that song was used 25 years later on the soundtrack of the iconic film Close Encounters of the Third Kind.

But that wasn’t the only Slim Whitman song to be used in a film, in Mars Attacks! his yodeling in the song, Indian Love Call explodes the heads of invading Martians and saves earth from annihilation. Slim Whitman’s country music and his yodeling abilities stood him in good stead and before he sold so many records through telesales, he toured the country circuit.

He worked with Elvis Presley in July 1954 when the, then, teenager was doing his first concert appearance as a supporting act to Whitman who was headlining. In the book Last Train to Memphis, author Peter Guralnick wrote that Presley drove the audience wild with his performance.

Whitman came on stage after the young Presley had finished and said, “You know, I can understand your reaction, ’cause I was standing backstage and I was enjoying it just as much as you.”

The yodelling country singer said that the reason his songs were so popular was because of the material. He said, “The material I did was lasting material,” Whitman said in 1991. “A lot of people thought I wasn’t doing anything, but I was in the studio. The biggest factor is the material you choose. You hunt, you cut.”

22 years ago when he was interviewed by Associated Press, he said then that he wanted to be remembered as a “nice guy.” He said, “I don’t think you’ve ever heard anything bad about me, and I’d like to keep it that way. I’d like my son (Bryon) to remember me as a good dad. I’d like the people to remember me as having a good voice and a clean suit.”

Slim Whitman, the country music yodeling singer has died aged 90, He is survived by his daughter, Sharon Beagle, and his son, Byron Whitman. There has been no news of funeral arrangements at this time.