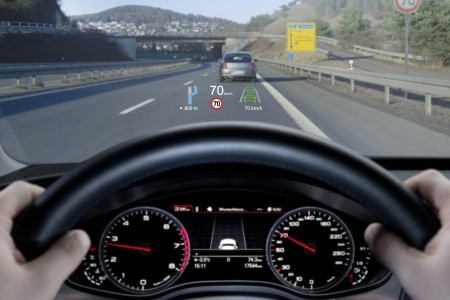 When people (okay some people) hear HUD they think about government housing assistance for certain purchasers. But what will be more common in technology is HUD “Heads-up display.” This is the next thing that is coming sooner than people may think others might just say, “why has it taken them so long?”

Well for your information if you don’t already know. Heads-up displays, ones that don’t require users to look away from the road, have been available to high-end luxury cars for years, but have yet to filter down to mass-market vehicles. Even in luxury cars, HUDs are often a pricey option. The HUD from Garmin brings the high-end navigation experience to any car for a fraction of the cost.

Even though Garmin isn’t known for smartphones, because that went bust a few years back. They’re primarily known for their GPS navigation systems. The company today (June 8th) announced the HUD, a portable heads-up display that’s compatible with navigation apps and projects directions directly onto a car’s windshield. The HUD is a small box that sits atop the dashboard. It offers two ways to view directions. It can project them onto a thin film that is applied to the inside of the windshield, or it can project them onto a reflector lens that attaches directly to the HUD. Either way, Garmin claims that the HUD provides “crisp and bright directions” that are in the driver’s line of sight and viewable at a glance.

But how will this work? In order for this to work it will need to be paired with a nearby smartphone running one of the three major OS’s be it Android, iOS, or Windows. But if you have BlackBerry OS you’re out of luck. Time to buy and Android smartphone (yes, I’m biased). This again, will be communicating between devices via Bluetooth.

According to Garmin, the HUD offers a wide array of features, including turn arrows, distance to next turn, current speed, local speed limit and estimated time of arrival. It also lets drivers know what lane to be in ahead of turns, warns of upcoming traffic problems, and even shows where safety cameras are located along a given route. These details are presented in a simplified way that Garmin claims improves driver safety because it keeps their eyes on the road, not their smartphone. The HUD is viewable both at night and in direct sunlight.

I for one hate taking my hands off the wheel for anything because there are too many crazy drivers out there. I feel this would also help because instead of looking at a small screen you’re looking forward using your peripheral vision to see the rest of your windshield (turning your head once in a while is fine, but there is no need to look at your passenger when you’re talking to them. If they aren’t hearing impaired, then they can hear you so don’t do it.)

In addition to the visual navigation cues, the HUD also can be used with spoken turn-by-turn directions when used with a compatible Garmin-made application. The directions are spoken by the smartphone or the car’s hands-free system, not the HUD itself. The visual navigation details will stay on the windshield even if the accompanying phone receives a call.

The HUD goes on sale later this summer and has a manufacturer’s suggested retail price of $129.99. In order to function properly, though, it must be used with Garmin’s StreetPilot or Navigon apps. Both apps start at $29.99 for regional maps; the full U.S. map costs more. The maps plus the hardware comes to at least $159.98 before taxes, but that’s still far below the cost to add a heads-up display to most cars from the factory.

This is cheap for me because I rather be safer than sorry. But what will they think of next. They have already created lights for blind spots on mirrors and cameras for rear or front facing. Well, what is in mind is voice. (KITT are you there?)

Intel research scientist Jennifer Healey made clear in a recent TED Talk on the potential benefits of cars that “gossip” with one another. By getting digital devices — including GPS systems, stereo cameras, short-range radios, and two-dimensional laser range finders common in auto backup systems — to exchange data and work together, a highway of communicating vehicles is very much a possibility.

“In the future, with cars exchanging data with each other, we will be able to see not just three cars ahead, (but also) three cars behind, to the right and left, all at the same time,” said Healey. “We’ll actually be able to see into those cars. We’ll be able to see the velocity of the car in front of us to see how fast that guy is going.”

With algorithms and predictive models, data-swapping cars will be able to predict future events as well. Intel researchers are even modeling “driver states” with a series of three cameras that detect a driver looking forward, looking down, or having a cup of coffee.

“We can predict the accident, and we can predict … which cars, are in the best position to move out of the way,” Healey said.

We think the future will be just years away when really it could be months with how fast technology changes. Soon our cars will drive themselves, but if they go crazy like real drivers, then I will have to opt for a manual car because I want to make sure all crazies are swerved around.