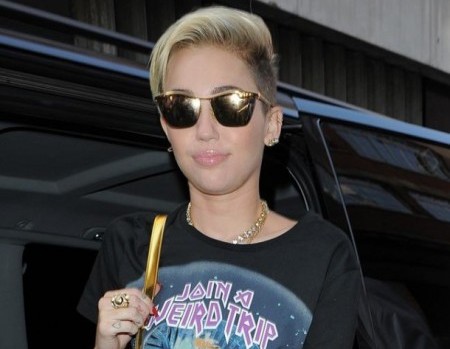 Miley Cyrus is still full speed ahead on her image change and today she adopted the “goth rock star” look as she was twerking towards her London BBC Radio One Interview with presenter Nick Grimshaw. You can see Miley in her very short mini skirt down below.

The We Can’t Stop singer showed up outside the BBC one breakfast show studios wearing gold shades, animal print high heeled sandals, a snappy t-shirt with “Join a Nerd Trip” emblazoned on the front, and a very small leather mini skirt. Well, for Miley it would have to be very small, she’s not a big girl by any means.

The 20 year-old winner of the Maxim’s hot 100 list of the world’s sexiest babes, stopped on her way into the studios to bask in the glow of her hundreds of fans who faced the unusual London heatwave to pay homage to their favourite singer.

If you ask any of those sweating fans, they would tell you, it was worth braving the heat to see Miley Cyrus twerking London like a goth rock star and that they’d all probably do it again.

Once she got inside the studio she told radio presenter Nick Grimshaw that she loved big crowds. She obviously decided to wear a bra today as the sight of her nipples peaking coyly through her top in New York yesterday got her a bit too much attention.

Miley talked about her instigation of the new “twerking” phase, her daring fashion choices and that it, “didn’t matter” about all the money she had earned at the young age of 11. She relayed to Nick that now it was, “all about the twerking.”

The ex Hannah Montana actress talked about getting a mention in Jay-Z’s new album the Holy Grail. In one of the lyrics she is mentioned directly with the line, “Cause somewhere in America/ Miley Cyrus is still twerkin’.” Miley is apparently very happy for the “free publicity” and she told Nick that the lyric and mention was, “Dope.”

The former Disney Princess is doing the publicity routine of promoting her newest single and its subsequent music video. This is the UK leg of her promotional tour. It has to be mentioned that earlier, before her BBC Radio One interview, the pop star had adopted a more “English” tweedy look in a one piece tweed jumpsuit. She was probably cold poor lamb, while we here in the UK are suffering through our version of a heatwave, Miley is used to much hotter climes.

But Miley is not too big a star to not be excited by her UK press tour. She tweeted earlier in the day on her verified Twitter account, “Slept 1 hour. Full day of press here I come.” We can imagine that her very small leather mini skirt will be very wrinkled by the end of her busy promotional day.

But don’t forget, Miley Cyrus, despite her current image changing techniques, is still a star, baby. She’ll probably have a few wardrobe changes handy as her long UK press tour stretches into the evening. We don’t doubt that Miley will be twerking London like a proper goth rock star until her day finishes!