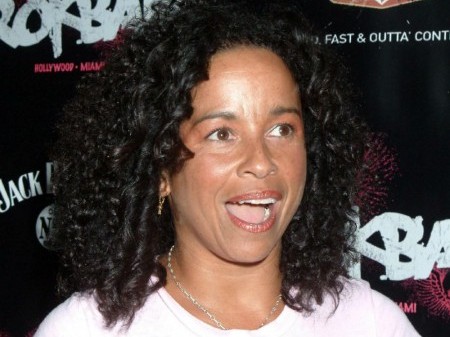 Rae Dawn Chong, daughter of stoner comedian Tommy Chong from the comedy team of Cheech & Chong, has caused a storm after a radio interview where she called her former Color Purple co-star Oprah Winfrey a “B**** and an overweight woman who would have been a “field ‘n’ word” back in the pre Civil War Days. But Chong explains what she meant in the YouTube video below, at least, she thinks she’s explained, watch the video and you’ll see what we mean.

But her somewhat garbled video of explanation, doesn’t really work. Her rant, as reported by TMZ sound like she can’t explain! Rae Dawn who is of mixed race, her father Tommy Chong is a mix of Chinese, Scotch-Irish, and French descent and her mother is of Afro-Canadian and Cherokee descent, was talking about working with the television icon “way back in the day” on the Steven Spielberg film. Seems things were okay back then, but later?

Chong was a guest on Matty P’s Radio Happy Hour and she was anything but happy! She spoke of how her relationship with Oprah went downhill after they’d worked together on The Color Purple. Apparently, once they finished the film, things went pretty sour.

The 52 year-old Chong revealed that Winfrey was “lovely” to be around in 1985 while the two were working together on the set of the Spielberg film. But when Chong got cast in the Arnold Schwarzenegger film Commando Oprah, according to Chong, turned into “a total b****!”

During the rest of the interview, Rae Dawn Chong let loose on the 59 year-old TV magnate. She came across as very angry about Oprah and her continuing success. Chong even had a go at Oprah’s weight issues and decided to go all the way back to the Civil War era to talk about where Winfrey would have fit in as a slave. Of course that was after she called Oprah a b****. Chong said, “If you look at the way [Oprah] looks, she looks like 60 years ago she would have been a housekeeper luckily. She would have not been a “house ‘n’ word” she would have been a field ‘n’ word.”

But Chong didn’t stop with her “historical” rant, she went on to say, “She’s so enormously insecure. If you wanna distill Oprah Winfrey down to like her most basic components. She wants to be beautiful. Imagine being [her]. She has all of the world. All the power in the world … and she only wants something that is only chemical, purely impossible.”

She also stated that Oprah wasn’t sincere in her dealings with people saying, “The thing that’s really great about Oprah that you can’t take away from her is that she’s a great brown-noser.”

Chong did give Winfrey as sort of “backhanded” compliment by saying, “No matter how vile she is, you kinda gotta go, ‘hello hats off’ like, you’ve done an amazing thing you have actually shifted the DNA of the universe.”

Since the interview has been aired and the media have pointed out just how vitrolic Chong was about Oprah Winfrey, the actress has gotten onto YouTube, that last stand of hope for those media and show business personalities who have committed some sort of social faux pa (Paula Deen, anyone?) and said that the media have taken her out of context.

Especially TMZ, according to Ms Chong. She says in the video that her rant was taken out of context and that her calling Oprah a “field ‘n’ word” was actually a compliment! Not to put too fine a point on it, the actress that ran around naked in her first “big” film (Quest for Fire if you’re interested, you can also see a much younger Ron Perlman – pre Hellboy and pre Sons of Anarchy) has obviously been into her dad’s funny tobacco pouch and lost her grip.

How on earth can Rae Dawn Chong call Oprah Winfrey a b**** and worse in a radio rant and then go onto YouTube with a disjointed explanation and expect everyone to believe that she was actually complimenting Oprah? She needs to stay away from daddy’s stash in future, at least before she does any more interviews. She might not have to do a video to “explain” then. Watch Chong explain in the video below.