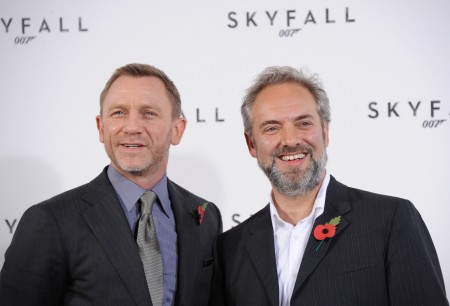 Just four months after telling the world that he would not be directing the next Bond film, Sam Mendes has now said that he is licensed to thrill again and will be taking the helm of the next 007 film.

The un-named film, referred to as the “24th” Bond, is already scheduled to open in cinemas on November 6, 2015 and it will star Daniel Craig as the “diamond-in-the-rough” version of James Bond yet again. This will be Craig’s fourth time on-screen as the British super-spy and the second time that Mendes has directed the franchise.

The film will be based on a screenplay by the Skyfall writer, John Logan.

In earlier interviews with Mendes, he made it quite plain that he would not be returning to helm the next Bond epic. Apparently, that was because he had prior commitments for a theatrical run of his version of Charlie and the Chocolate Factory and King Lear.

In an interview with British magazine Empire, Mendes said that he would need to focus all his attention on his two stage projects and that he would not have time to work on the next Bond film. He also left the impression that Skyfall had pretty much exhausted him and despite his obvious pleasure at how well the film performed, he needed a break.

A break that everyone was glad to allow. The Bond producers were all to willing to meet any prior demands that Sam Mendes had and wanted to give him a license again to thrill audiences with the next 007 film.

The Road to Perdition and Skyfall director said that the Bond producers let him focus on his theatrical stage productions and that because of that, he would be returning to preside of Craig again and that he was quite eager to do so.

Apparently, after his initial reticence at returning, the producers gave the 47 year-old director a couple of months to concentrate his efforts on things “non-Bond” and then began negotiations with him to return.

Mendes said, “I very much look forward to taking up the reins again, and to working with Daniel Craig, Michael G. Wilson and Barbara Broccoli for a second time.”

While Mendes has stated that directing Bond was an overall enjoyable experience, he also said that it was exhausting and that even if he did not have his prior stage commitments, that he’d have to think hard about returning.

Producers Michael G. Wilson and Barbara Broccoli and Sony studios will be very pleased that Mendes is back onboard. The Academy Award winning director worked hard on Skyfall and the Bond fans loved the film. Skyfall pulled in a whopping $1.1 billion in worldwide box office cash and it currently ranks as the highest grossing film from the United Kingdom and falls in eight place on the all-time grossing list.

Sam Mendes has not said what thing in particular, apart from his being allowed to finish his stage production schedule, caused him to change his mind about returning to the James Bond verse. But just the actions of the producers honouring his prior productions and meeting his “personal” project’s schedule seem to have done the trick.

Presumably, the studio and the producers were more than happy to acquiesce to Mendes and his busy schedule, because they really wanted to renew his license to thrill again on the next Bond film for 2015. Mendes will have a lot of time to repeat his billion dollar trick with the new 007 film.

One Response to "Sam Mendes Licensed to Thrill Again"