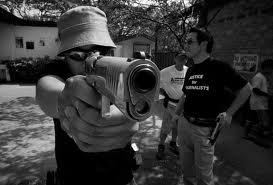 Reports of two writers shot dead in Manila are still coming in.

Richard Kho and Bonifacio Loreto were gunned down Tuesday in Quezon City along Pilot Drive in Barangay Commonwealth. The two men were in front of Loreto’s house when gunmen on motorcycles opened fire.  Both Kho and Loreto were both columnists of weekly tabloid Aksyon Ngayon. The last  publication of Aksyon Ngayon was over a year ago.

The two writer were known for their political publishing.  Bicol Express and Bicol Express were two of the writers titles. Richard Kho’s daughter  Richelle Kho, was quoted as saying she believes the murders were connected to the two men’s work. Police have recovered 9 millimeter and 45 caliber pistols thought to be used in the crime.